LeBron James rumors: Migos make a confident prediction that he will stay East With it officially being the time of the year when everyone has a declaration to make about where Cleveland Cavaliers forward Lebron James will play next, it is now the turn of Migos to chime in.

For those unaware, Migos is not one person, but a three-person rap group. As the kids say these days, they are all that and a bag of chips.

Oh? They don’t say that?

Anyway, as you can tell in the above clip, Migos seems pretty confident in knowing where LeBron James is off to next.

That being said, ugh, what are we doing?

James does have an important decision to make, as he will likely have to decide relatively early if he wants to stay in Cleveland or if he is willing to court some suitors. Given that he’s the best player in the NBA, arguably the greatest in the history of the sport, it is safe to assume there will be a few teams interested in his services.

Nevertheless, we can now add Migos to the list that includes Gary Payton, and a slew of others with no actual information, who all seem to ‘know for sure’ what the King will do next.

My guess? Probably drink some beers, relax with the kids and enjoy the early portion of the summer. 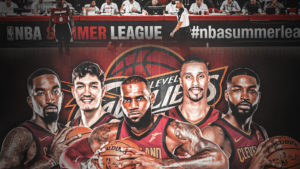