Have you ever wondered what sort of movies LeBron James likes to watch?

Last night, the NBA’s defending champion Cleveland Cavaliers squared off against the Sacramento Kings for a Friday the 13th showdown inside The Golden 1 Center, resulting in a 120-108 victory for the Wine and Gold. Prior to last night’s game, James spoke to ESPN’s Dave McMenamin with regards to having superstitions and which genre of film he prefers.

Superstitions? No,” James said. “But I’m a huge horror fan. I love horror movies. Obviously, Friday the 13th being Jason Vorhees day, I think it’s cool. I remember as a kid on Friday the 13th, right when I got home from school, my mother and I, we would just watch horror movie after horror movie after horror movie. It’s crazy because now my kids love horror movies, too. My two boys love them. When I come home, they be wanting to watch horror movies. But no superstitions besides just having great respect for some of the great slashers of all time, some of the greatest ones of all time. And Freddy (Krueger), Michael Myers and Jason Vorhees and Chucky and a couple more.”

It seems James is well-versed in horror films. McMenamin also reports that Nike has recently designed a pair of LeBron 13s to reflect James’ love for the horror genre. Spots of red paint are scattered across the bottom portions of the shoe to create the impression of blood.

The full moon and auspicious date had no effect on James in Sacramento, where he made his NBA debut in 2003. The King turned in 16 points and season-high tying 15 assists in his 42 minutes of playing time. 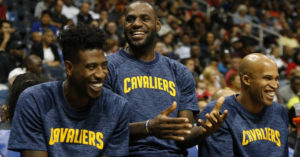