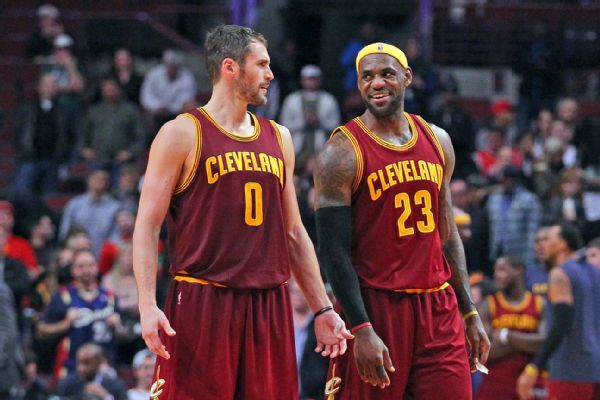 When Kevin Love visited the Dan Patrick show yesterday, he chimed in on who he thought should be this season’s MVP:

He also mentioned earlier in the day that he wasn’t exactly the best of friends with LeBron yet becuase their relationship is still evolving in this up-and-down season. ESPN’s Brian Windhorst reported on Love with his somewhat instigative reporting:

Windhorst: I like Kevin Love's honesty. Its no big deal he isn't best friends with Lebron and Westbrook is really having a better year #Cavs

Windhorst: I thought Love would be an upgrade from Bosh but there hasn't been much development between him and Lebron. #Cavs

Today, LeBron James came out and gave a response that didn’t really surprise anyone:

“Kev has his own opinion who he believes is MVP,” said James. “No one should fault him for that.”

Love has realized that the media attention his team is receiving is still unlike any he’s every been a part of. After his appearance on the show however, Love cleared up the statement “I choose Russ over LeBron” that was made viral by the media yesterday, saying this:

“If you choose to get the little three or four second clip of my whole answer, I said LeBron could very well be the MVP, Steph Curry, James harden. Those are guy you all talk about and you know very well all of them could be the MVP.”

LeBron doesn’t seem to mind not leading the race or not winning the MVP this season, but he said more than just the best player on the best team in terms of win-loss records should be taken into account: