When going into a hostile arena, some opposing players like to play into the crowd while others opt to ignore them and just play their game.

During last night’s game between the Golden State Warriors and the Cleveland Cavaliers, LeBron James was apparently heckled by a Warriors fan sitting courtside. As the camera focused on Draymond Green, who was mic’d up for the TNT broadcast, James was seen shutting the fan up, letting him know he already had three championship rings in case the fan forgot.

Can’t blame James. Every once in a while, the critics get so focused on hating the King that they forget his accomplishments. 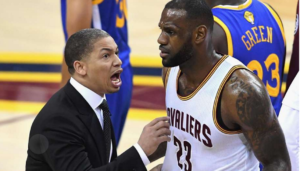