After sweeping the Toronto Raptors in their second-round matchup, the NBA’s defending champion Cleveland Cavaliers are once again heading to the Eastern Conference Finals.

The Cavs are still waiting to learn who their opponent will be in the next round. The Washington Wizards and Boston Celtics are currently tied at two games apiece in their series. So, of these two teams (Boston and Washington), who would LeBron James prefer to face in the conference finals round?

“I’m just excited about us getting an opportunity to represent our franchise, represent us in the Eastern Conference Finals, and go play for the big one,” James said after yesterday’s 109-102 closeout win over the Raptors. “So, it doesn’t matter (who we play in the next round).”

The won the regular season series against the Wizards 2-1, including the overtime thriller in Washington D.C. that saw the LeBron James bank in a game-tying three pointer at the regulation horn and Kyrie Irving take over once James fouled out in the overtime period.

The Cavs won the season series against the Celtics 3-1 averaging 116.3 points and outscoring the Celtics by an average of 7.8 points per game, which includes a convincing 23 point victory in Boston in early April.

The Cavs will have quite a few days off as they await the outcome of the Boston-Washington series. Until then, James and the champs will be hitting the practice court to lock in their game plans. As soon as Cleveland swept the Indiana Pacers in their first round matchup, Cavs head coach Tyronn Lue began preparing his team for both of their potential second round opponents. It’s probably safe to say that coach Lue will take a similar approach in game planning for the Wizards and Celtics. It’s also a safe bet to say that coach Lue will have his men ready for the challenge. 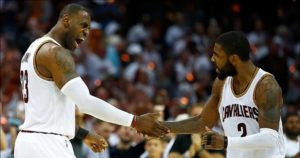