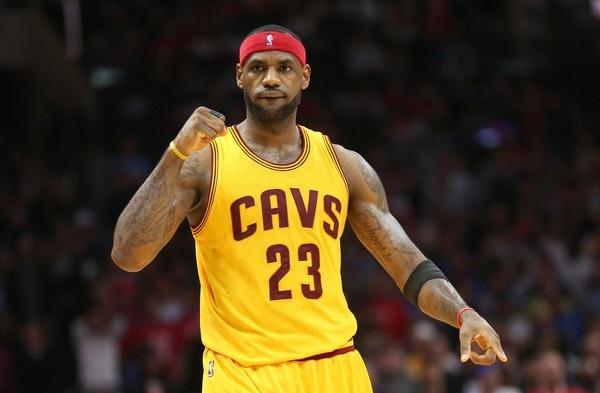 The Cleveland Cavaliers are currently the fifth seed in the Eastern Conference as the All-Star Weekend approaches. LeBron James has been phenomenal ever since he returned from his two-week hiatus and things are turning around for the Cavaliers as they have now won 13 of their last 15 games games. As James gets set to play in his 11th consecutive All-Star Game, we take a look back at the top 10 plays by LeBron James in the 2014-15 season thus far. We start with number 10:

With the clock winding down in the 3rd quarter, LeBron James takes it to the rim for a one handed jam with a couple of seconds remaining. The lead extends to 6 points over the New Orleans Pelicans. LeBron James gets his first bucket in his first game in front of his home fans. LeBron James is at the end of the break with a great outlet pass from Kevin Love as Melo wraps him up. He finishes the play while getting fouled for a three-point play! However, the Cavaliers lost by 5 points in this season opener. LeBron James gets a no look dime to Kyrie Irving with Cleveland enjoying the 1st quarter double-digit lead against Pacers. Kyrie finishes under the rim to increases the score to 18-4. You will see an even better no-look pass in the next play! Kevin Love was left wide open in the paint and LeBron makes no mistake while getting the ball to him. He set up a nice play with a no look pass and a dunk at the end of it. He even gave a stare to the Laker bench with both teams locked in a close game before halftime.

LeBron James is at the end of another fast break with scores tied 77-77. This time, against his former team in the Miami Heat on Christmas day. LeBron throws it down and lifts himself up on the rim and receives a technical foul for it. He looks a bit surprised. Cleveland ended up losing by 10 to his old team.

With Cleveland down by 11 against the Suns, LeBron goes behind the back to split the Suns defense and drives to rim for a one-handed tomahawk with 5.4 seconds remaining in the third quarter. With a minute left in the third quarter and the Cavaliers enjoying a nice lead over the Brooklyn Nets, LeBron dishes an underhand lob from the three-point line to Tristan Thompson who throws it down with two hands to end the fast break. LeBron gets fancy in this isolation play against the Nets. He spins, jab steps, fades away, and hits the jumper to extend the lead to 91-71. The Duke and Duchess of Cambridge were making theird first trip to the United States and James did not disappoint. Jay-Z gives us his priceless reaction to the incredible shot as LeBron runs back on defense. With Cleveland down 10 with just 4.4 seconds left before halftime, James goes to the free-throw line for two shots. James makes the first, but misses the second. Marion gets the rebound, misses the layup, but James skies for the rebound and putback dunk. 1. LeBron Throws It Down On Len

LeBron James goes for a one-handed baseline reverse early on in the game and posterized Alex Len. The Suns had way to stop LeBron the entire game as he dropped 33.