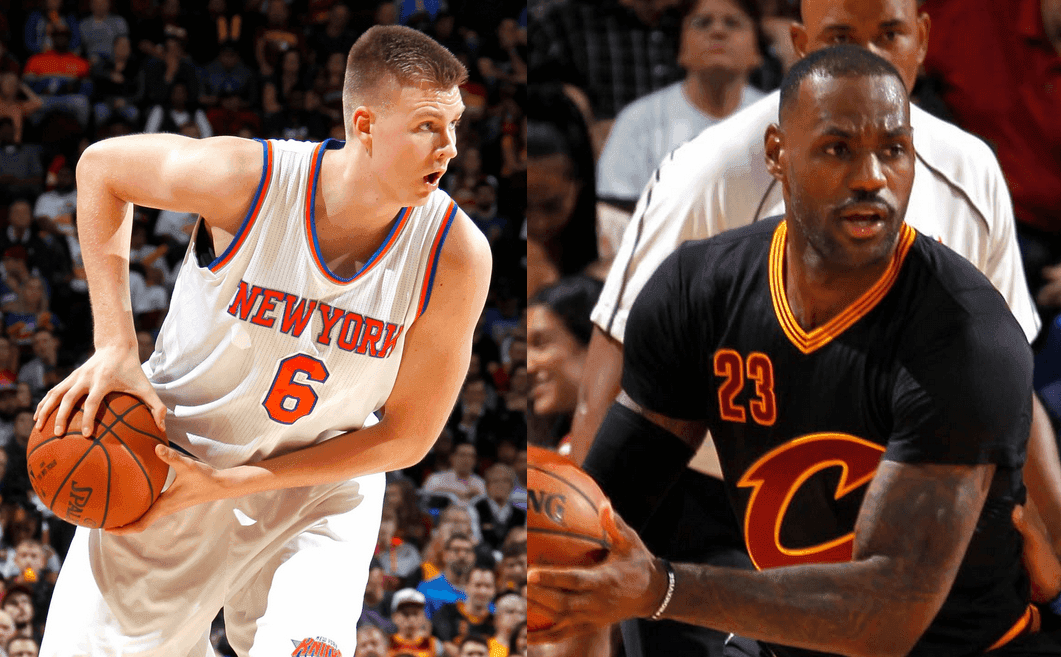 The New York Knicks made one of the most questionable draft picks this past offseason when they selected Kristaps Porzingis withthet fourth overall pick. Not questionable as in he was a bad pick, but fans as well as analysts alike were unsure how slowly or quickly Porzingis would be able to adapt to the NBA game and start being an effective piece for the Knicks. It looks like the Knicks haven’t had to wait very long.

In nine games for the Knicks, Porzingis has averaged 11.6 points, 9.0 rebounds, 0.7 assist, 1.0 steals, and 1.2 blocks per game. He’s also hit five three pointers (should have been six, but the game winning three was waved off after the referees reviewed the play and determined it was still in his hands) and hauled in four double-doubles, all of this in just 24.7 minutes per game.

LeBron James got his first look at the rookie last week when the Knicks visited the Cavs, and tomorrow night, Cleveland visits New York for the first time all season. James met with reporters on Thursday and talked about what he’s seen so far from the rookie.

“I think he’s a pretty good player,” James said. “I think he has a bright future if he continues to get better. He will get stronger and I think he knows how to play the game. I think it was a good decision for them.”

Porzingis was the subject of a controversial call on Wednesday, when he hit a game winning three pointer with just 0.4 left. After further review, the referees determined that the ball was still on his fingertips when the clock expired. It was an impressive play nonetheless, and the Hornets were lucky that shot didn’t count because he wasn’t even contested. It was arguably a terribly low pass that caused the 7’3 Porzingis to take more time to shoot.

“They gave him an open shot,” James said. “I don’t know why. He’s a very good 3-point shooter. He’s confident in his ability and he should be.”

Now, everyone knows what Porzingis is capable through nine games, and the Knicks will be healthy today against the Cavs as they’ve got Arron Afflalo back from a hamstring injury. The Cavs and Knicks tip off tomorrow at 7:30PM EST on NBA TV.