This year’s top overall pick Ben Simmons is highly touted as a similar version of LeBron James, with his combination of length and playmaking abilities. The native of Australia also gets special attention from the four-time Most Valuable Player because of his affiliation with James’ Klutch Sports Group.

In his interview for The Dan Patrick Show, Simmons shared what transpired during his quick chat with the Cleveland Cavaliers superstar which happened after he was drafted by the Philadelphia 76ers.

“He (LeBron James) said congratulations, and I told him I was looking forward to finally matching up against him in the preseason.”

“He flipped the camera, and it was the championship trophy, so I couldn’t say anything back.”

With the kind of performance that LeBron James put out in the recently concluded NBA Finals, he has every right to respond that way to the rookie. But it was all in good spirits, of course.

Simmons may just have to use that as a motivation for him to get to James’ place and one day be the guy flashing the hardware. 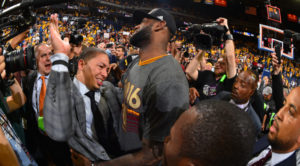