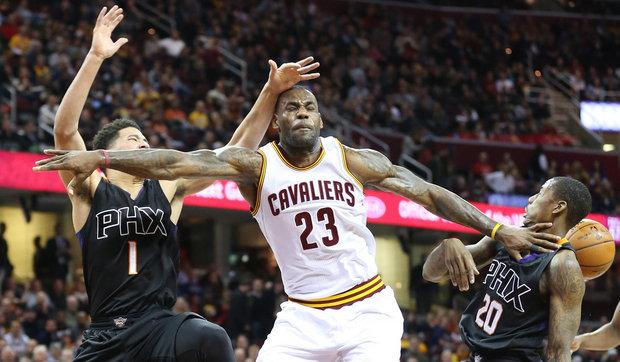 LeBron doled out the praise during his first of potentially many “Open Run” podcasts sponsored by Uninterrupted. After already calling Kawai Leonard one of the best defenders in the league, LeBron was asked by writer Stefan Marolachakis who he believed was the best young gun in the league. While league-wide players such as Karl Anthony Towns, CJ McCollum or DeAngelo Russel might be mentioned, LeBron chose another Rich Paul co-sign.

“That no one knows about? You know, what? I’m going to be honest. If it’s someone who is under the radar right now that I believe is going to be a really, really, really good, all-star player in the league – it’s Devin Booker from the Phoenix Suns.”

Booker is an excellent choice by LeBron. He had a fantastic rookie year, playing starter’s minutes due to injury. Booker averaged 13.8 points a game, enough to earn him All-NBA Rookie First Team. More impressively, however, Booker also became just the sixth player in NBA history to score 1,000 points as a teenager. Other members of this exclusive club? Kevin Durant, Dwight Howard, Carmelo Anthony, Kobe Bryant and LeBron James. Booker has the potential to be one of the last shots for a player to break Kareem Abdul Jabbar’s record in all-time scoring, as he entered the league at a young enough age compared to the 20-somethings that are now required to stay in college for at least one year due to the CBA rules.

Booker has been lauded by other NBA greats, including Jimmy Butler, Dwayne Wade and Kobe Bryant for his professionalism, calm demeanour, and fun attitude while on the court. LeBron often recognizes high basketball IQ, and he may have just found another player that found his way onto The King’s radar. Or, perhaps he’s been on it…