Since the start of free agency, not a lot has been heard from LeBron James about recruiting other players to join the Cleveland Cavaliers, unlike in past years. However, the four-time MVP recently broke his silence with what is believed by many as his subtle way of letting everyone know who he enjoyed playing with the most before.

After a series of videos he posted the past few days with some of his family members, The King shared a throwback photo of him together with his teammates from the 2008 Olympics, where he can be clearly seen savoring the moment together with Deron Williams and Carmelo Anthony.

While Williams already joined the Cavs last season, Anthony‘s future with the New York Knicks remains unclear. Speculations emerged last month that he may be willing to finally waive the no-trade clause in his contract to join the Northeast Ohio team or the Houston Rockets, but no deal has materialized yet, and he is still with the Knicks until now.

James’ recent post may be his way of enticing Anthony even more to consider the Cavaliers as his next team. By sharing an unforgettable moment in their National Team careers, it may serve as a reminder to Anthony that playing together has been a proven formula for success, and could translate to more celebrations in the future. 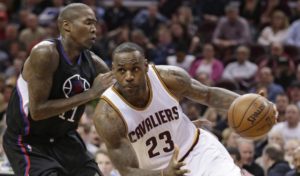