LeBron James has not ruled out playing in 2020 Tokyo Olympics LeBron James came into the summer of 2016 a three-time NBA Champion, and brought one to his home-state of Ohio as well as the city of Cleveland.

Six straight NBA Finals, three very impressive championships won, and one gold medal in that time as well for the King. But after passing up on the 2016 Rio Olympics, can LeBron James grab another chance at a gold medal with Team USA? According to an interview he had with Rachel Nichols that will air Thursday morning, he hasn’t ruled out that possibility.

“Every time I watch ’em, I wish I was out there,” James said. “I did not retire from Team USA. I just did not play this summer. So I left the door open.”

Oh & yes, talked Olympics with LeBron too. Here was his quote to me. (Also noted how, gosh, Tokyo is a nice city 😀) pic.twitter.com/1jgbr51sab

James has been spending time vacationing and enjoying life with his family after lifting a huge burden off his shoulders and bringing a championship to Cleveland.

It may have also been smart to sit out since news of the Zika outbreak came out as well as the number of Olympians who have been robbed, including Team USA’s decorated swimmer, Ryan Lochte.

With LeBron leaving the door open for the 2020 Olympics in Tokyo, Japan, he’ll be 35 years old and have another chance to lead his American teammates to a gold medal. 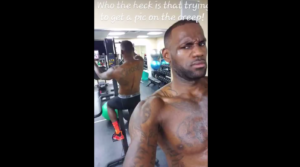