With less than a week until the start of training camp and just over a week until Tristan Thompson’s qualifying offer is no longer a guarantee, talks between the two sides are expected to heat up.

Coming into this offseason, one of the biggest concerns was the report that LeBron James would not sign a new deal with the Cavs until Cleveland settled its other free agency matters like Iman Shumpert, Kevin Love, J.R. Smith, and Tristan Thompson.

As soon as contracts could be signed, however, James agreed to a deal and signed it the next day. This after Thompson and the Cavs had already began their contract dispute.

Joe Vardon of Cleveland.com reports on LeBron’s position on this issue:

“But a source close to James said Thompson’s contract is a “non-discussion right now” for James as it relates to his own future, and a team source said the Cavs believe ‘LeBron’s goals don’t change relative to Tristan Thompson or anyone. Be as good as we can be for as long as we can be.’

“In other word, the nuclear option, or James demanding the Cavs pay Thompson what he wants or else, doesn’t appear to be on the table.”

There’s a $14 million difference in what the Cavs have offered Thompson (5-year, $80 million) and what Thompson is demanding (5-year, $94 million). If Thompson doesn’t agree to a new contract or accept the $6.9 million qualifying offer by October 1, the latter is off the table for Thompson, as Cleveland can decide whether they want to extend Thompson a qualifying offer or not. Steve Kyler of Basketball Insiders explains.

Joe Vardon further talks about James’ opportunity to apply pressure on the Cavs to sign Thompson.

“But sources said James has not applied pressure internally for the Cavs to acquiesce to Thompson’s salary demands. And, back in August, James told reporters that “things need to be worked out from his side and the Cavs.” Basketball observers at the time saw James’ statements as an opportunity passed for him to push Cleveland toward paying Thompson’s asking price.

“There is ample time for James to apply that pressure – one Tweet is all it would take – and on Monday James will take questions from reporters at the team’s media day for the 2015-16 season.”

LeBron not pressuring the Cavs into a deal doesn’t mean that he’s taking the Cavs’ side, but it does mean that Thompson and the Cavs will have to come to an agreement themselves without James’ interference.

Stay tuned for the latest on Tristan Thompson and his contract dispute with the Cavs. 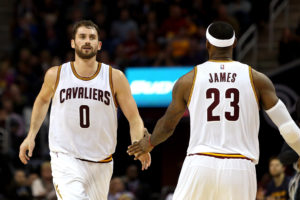