After sweeping their way through the first two rounds of this season’s NBA Playoffs, the defending champion Cleveland Cavaliers will face the Boston Celtics tonight inside TD Garden at 8:30 p.m. for Game 1 of the Eastern Conference Finals.

Are the champs, who have been on the longest playoff layover in franchise history, ready for another round of battle?

LeBron James, a three-time champion and 14-year NBA veteran, tells Uninterrupted that playing in front of the home crowd at Quicken Loans Arena is all about familiarity.

While playing at home is nice, James is no stranger to the postseason road. In fact, The King has made 12 playoff appearances over the course of his illustrious career in the association. The Akron Hammer tells Uninterrupted that he actually likes playing in hostile arenas.

“On the bus, it’s just like you’re getting ready for war because it’s just you and your teammates and a couple of people that’s traveling with the team,” James said. “It’s just like 20 of you guys. It’s almost like you feel like you’re held captive on a mission before it begins, so your nerves are a little bit different.”

“I’m more relaxed on the road, actually,” James continued. “Over the years, I’ve just built this love and comfort of being on the road and being in hostile buildings and going against opposing teams on their home floor.”

Like most NBA players, James is a man of routines. The former No. 1 overall selection in the 2003 NBA Draft says it’s good to be confident, but not entirely comfortable.

“I’ve played in every Eastern Conference arena on the road in the playoffs — every team,” James said in closing. “So, I know exactly where their arena is. For the most part, I’ve always had the same locker room in these arenas, so I’m just pretty relaxed — you know, just getting ready to get my routine down. I get a little bit more nervous at home because everyone is so comfortable with being home. You know, especially during the playoffs, you don’t want to be that comfortable. You want to be confident, but you don’t want to be that comfortable because one loss at home can switch a whole series. You don’t want to be cool going into a game, so I’m kind of more nervous during the home games than I am on the road.”

Getting ready for Game 1 vs. the @Celtics on the road, @KingJames breaks down embracing hostile arenas over the years. #NBAPlayoffs pic.twitter.com/XlCvV8Z9JW

James and the Cavaliers, who won the regular season series against the Celtics by a tally of three games to one, will play the first two games of the Eastern Conference Finals in one of the loudest arenas in the NBA. As coach Tyronn Lue often says, “It’s time to put up or shut up.” 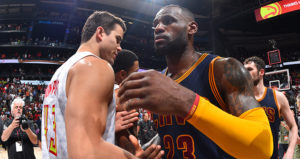 JUST IN: Kris Humphries: ‘Cavs need to give LeBron extra money for being the GM’
Related TopicsCavaliersLeBron James