LeBron James on Kyrie Irving’s growth as a playmaker 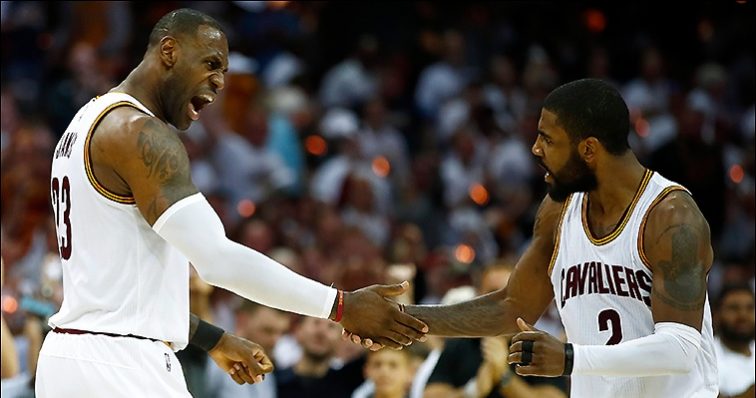 Cleveland Cavaliers point guard Kyrie Irving is improving his game with each passing season. In the Cavs’ sweep of the Toronto Raptors, the former No.1 overall pick in the 2011 NBA Draft averaged 22.3 points, 8.5 assists and 2.0 steals per game. LeBron James spoke to reporters after yesterday’s win over the Raptors with regards to Irving’s growth as a play-maker in the association.

“Kyrie can score on anybody he wants,” James told ESPN. “ANYBODY. On a consistent level. His next growth, which I believe is going to make him a great, an all-time great, is when he can also consistently make other guys around him better, which he is doing now. This is great to see. It’s always great to be a part of somebody’s maturation process. You know what I’m saying? I love it.”

Irving, who sometimes catches some flak for his lack of assists, chimed in on his recent success in that department after yesterday’s 109-102 closeout win in Toronto.

“Understanding that my effect on the game doesn’t necessarily have to be just shooting the ball all the time,” he said. “Just growing with the team I’ve been part of. (My assist totals have) definitely been picked apart since I’ve come into the league, and for me personally, I’ve just always felt like taking over the game came from literally just putting the team on my back and going out there and trying to score as many baskets as possible. But there are so many more facets of the game you can be better at.”

According to ESPN Stats & Info, James and Irving combined to score or assist on 92 of the Cavs’ 109 points in Sunday’s closeout win. Let that sink in for a moment…

Through the first three quarters of yesterday’s Game 4 match-up, Irving had already posted 16 points and nine assists. Yet, it was the fourth quarter where Uncle Drew really put his foot on the gas, scoring 11 straight points to erase a 16-point deficit.

Yes, Irving is a prolific scoring machine with handles like we’ve never seen before. However, if he can indeed continue distributing the ball with this level of efficiency (46 assists through eight postseason games this season), opposing sides simply won’t stand much of a chance.

JUST IN: Dwane Casey admits that the Cavs did flip the switch
Related TopicsCavaliersKyrie IrvingLeBron James