The second count of votes for this year’s NBA All-Star game, which is scheduled to be played inside The Smoothie King Center in New Orleans, Louisiana on Sunday, February 19th, are in. LeBron James, Cleveland Cavaliers superstar small forward and Kyrie Irving are leading the Cavs in the Eastern Conference while Golden State Warriors guard, Stephen Curry, is leading the tally in the West.

James, who has made 12 prior NBA All-Star Game appearances (2005-2016), is having one of his best statistical years as a professional basketball player, averaging 26.1 points (team-high), 8.1 assists (second-highest assist average of his career), and 7.9 rebounds per game. The King currently leads all candidates with 1,066,147 votes. Surprisingly closer to James than expected is Mikwaukee Bucks forward, Giannis Antetokounmpo (963,110), followed by James’ Cavs’ teammate, Kevin Love (473,328).

Looking at the Western Conference, Curry, who is also a former All-Star (2014-16), is leading the charge with 990,390 votes. Houston Rockets guard, James Harden, pulled in 961,685 votes, placing him just behind Curry amongst Western Conference back-court vote-getters. 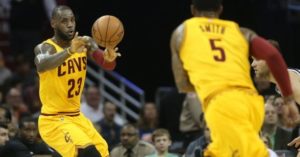