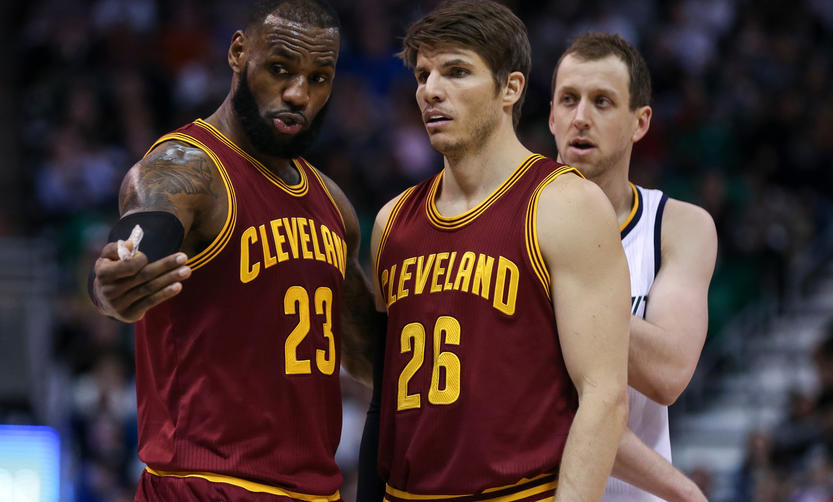 Last night, the defending champion Cleveland Cavaliers squared off against the Toronto Raptors for Game 3 of the Eastern Conference Semifinals, resulting in a 115-94 victory for the road-bound Cavs.

The champs came out a bit sloppy in the opening stages of last night’s game. However, a series of clutch shots from Kyle Korver in the second half seemed to put the final nail in the preverbal Game 3 coffin. Last night, Korver turned in 14 points (5-7 from the field, 4-6 from beyond the arc) and three rebounds in his 21 minutes of playing time. Korver, who is a career 43.1 percent from downtown, also scored a plus/minus of +14 last night.

During his post-game media availability, LeBron James, who finished last night’s game with 35 points, eight rebounds, seven assists, and one steal, had high praise for Korver’s performance in Game 3, simply calling him “automatic.”

“He’s automatic,” said LeBron James, who turned in another stellar postseason performance with 35 points, 8 rebounds and 7 assists. “When (Korver) steps on the floor, eyes have to be on him. … Just his ability to be out on the floor just helps us all out offensively because it just creates more space. From the time we got him all the way to now, and as we continue to play throughout the postseason, he’s been huge for our ballclub.”

Believe it or not, Korver, who has made the fifth-most three-pointers in NBA history, is not only a great marksman, but he’s also a great defender. Last night, the smooth-shooting swingman turned in two big blocks.

“You don’t get to play in the fourth quarter unless you play defense,” Korver said. “I’ve learned that over the years.”

So far in this season’s playoffs, the Cavs have played their way to a 7-0 record. Korver has played a large part in that achievement, and he seems to be more comfortable in his role with each passing game.

“I think my role means some days there’s shots, like tonight there was a few shots, and some days it’s just, how do we get [James and Irving] more space?” Korver told ESPN. “My role a lot of times is how do I help the great players be greater?”

.@cavs ride the 🌊
LeBron credits the defense and Korver's hot hand for taking control of the 4th quarter and game pic.twitter.com/eJkZBbHUBR JUST IN: The Cavaliers team that LeBron James took to the NBA Finals as a 23-year-old
Related TopicsCavaliersKyle KorverLeBron James