Before Wednesday’s Cavaliers finale against the Washington Wizards, LeBron James spoke with the media as part of his pre-game interview routine.

Today, James apparently decided to be funny. When asked who he thought should be MVP, here’s what he responded with:

LeBron asked who his MVP pick is pregame. After a slight pause: "Kevin Love."

LeBron James was asked who he would vote on for MVP and he said Kevin Love, with a smile.

Maybe those comments fired up Love, because he was the MVP of the first half of Wednesday’s game, scoring 19 points on 5-6 three-pointers in just 18 minutes, as David Blatt decided to sit the starters for the second half.

Love will be appearing in his first playoff series Sunday against the Boston Celtics on ABC. 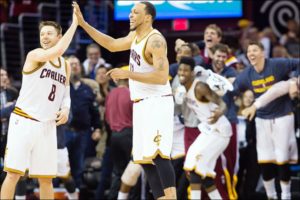