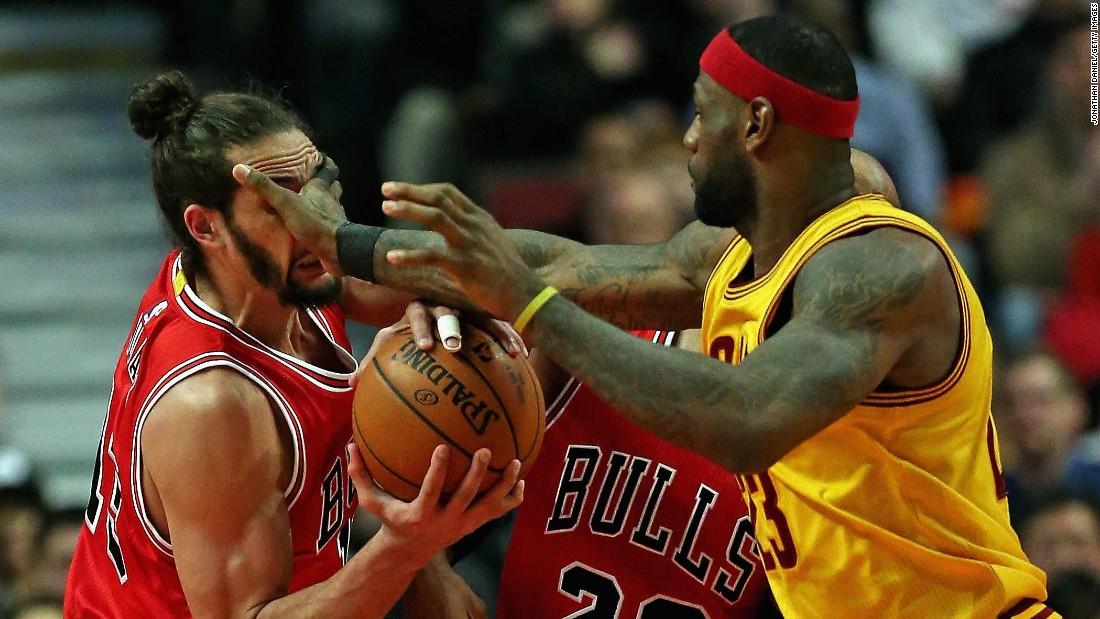 Joakim Noah has never beaten a LeBron James led team in a seven-game series. That’s a fact. But it hasn’t stopped Noah from delivering sound byte after sound byte when it comes to anything that relates to James whether it’s the city of Cleveland, the Cavaliers team, or even LeBron’s former Miami Heat squad.

When the Bulls visited the Cavaliers to cap off their regular season series, Noah dished out another one of his sweet vocabulary words to LeBron. We’ll just leave the lip reading to yourself.

In another “no love lost moment”, LeBron drives to the hoops but gets grabbed/smacked by Noah while in midair. 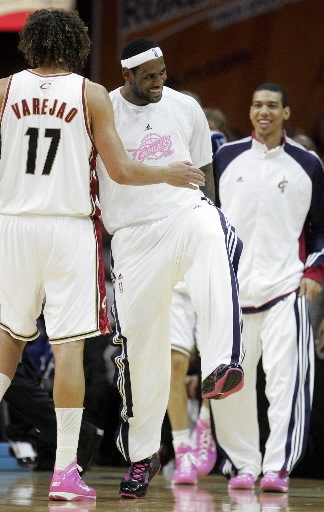 The outspoken All Star center of the Chicago Bulls has definitely embraced the role of being the four-time MVP’s number one troll and it all started in a regular season matchup between the Bulls and Cavs in 2009. With the Cavaliers enjoying a comfortable lead, LeBron James and then-Cavalier Danny Green were seen dancing on the sidelines and Noah took offense by trash-talking James while he was taking free throws. James then approached the Bulls’ bench only to be separated by cooler heads.

Noah also delivered what’s probably the most hated line by Cavaliers fans during the Bulls 2010 first round matchup against the Cavaliers:

“I don’t know about Cleveland, man, there is nothing going on. It’s bad, man.”

Following it up with another sweet message.

“You like it? You think it’s cool? I’ve never heard of anybody going to Cleveland on vacation. What’s so good about Cleveland?”

While that did not work for Noah, it obviously did wonders for JR Smith although that’s another topic but it’s nice to point out how Smith drained eight threes on Noah’s Bulls a few days ago.

Even when LeBron James was in Miami, Joakim Noah’s animosity towards James never fainted. The two still shared a few run-ins and Noah, despite not singling out James, took a jab against the Heat in an interview after losing in the 2011 Eastern Conference Finals.

“You gotta give Miami credit. They’re Hollywood as hell, but they’re a very good team.”

Right there, Noah indeed gave credit to their tormentors but not without a subtle hit on Miami’s alleged tendency to flop which was also targeted on LeBron whom people have pointed out to be among the top graduates of Anderson Varejao’s School of Arts.

On July of last year, while everyone was singing praises to LeBron James for deciding to come home and rectify his past issues in Cleveland, Joakim Noah had this to say:

“I’m happy for LeBron. He gets to go home; people are happy over there. I really hope we can kick his ass as many times as possible.”

Joakim Noah is a very emotional player. He is someone whom opposing teams’ fans simply love to hate but he appears to thrive on the animosity. On the other hand, LeBron James has developed a level headed approach to the game and understands that he’s too valuable to even get himself entangled in Noah’s mind games. You may have observed in the second video from above how LeBron simply shrugged off the hard foul from Noah without any retaliation. That has been LeBron’s shell which Noah has been trying hard to crack for years.

The Bulls and the Cavs could very well see each other in this year’s playoffs and that is a very much welcome scenario for Noah.

“I think we’re a confident group. And it would be great to play them in the playoffs. It would be very, very exciting, something that I really hope happens.”

While Noah has always been brash with his comments, he does have the backings to his words as Chicago is close to being a hundred percent healthy and that makes them a serious threat to the Cavaliers hopes to play in June. But the leader of the Cavaliers is now wiser and better equipped with the knowledge to weather the playoff storm and the debris that are about to meet some of his inexperienced yet talented teammates.

Word of advice for Joakim, be careful what you wish for you might regret it in the end.