The Cleveland Cavaliers defeat the Boston Celtics on T hursday night and will have enjoyed a week off before the start of the 2017 NBA Finals this upcoming Thursday night in Oakland, CA. When I say ‘enjoy,’ I really mean it.

On Saturday night, some Cavaliers players were seen at the ‘Future: Nobody Safe Tour’ at the Blossom Music Center in Cuyahoga Falls, Ohio. The lineup featured Future (obviously), Migos, Tory Lanez, Young Thug, as well as A$ap Ferg, and the Cavs players were clearly turning up.

LeBron and J.R. went off at the Future concert (NSFW) (via iamquincy_22/IG) pic.twitter.com/ukh6wh8ExH

With the NBA Finals beginning in just five days, the Cavs are clearly very worried about what lies ahead. 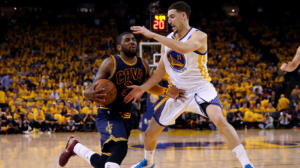