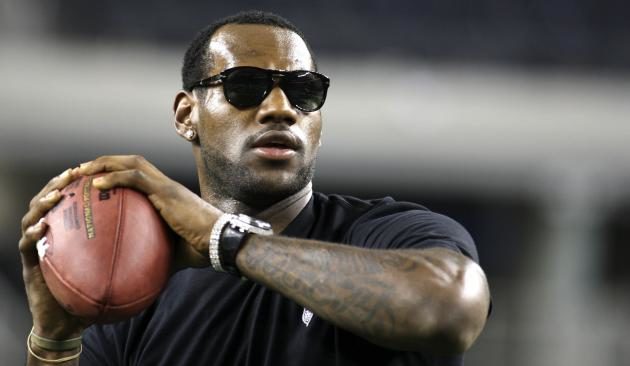 Everyone knows how great LeBron James is on the basketball court, but you might not be aware of how special he was on the football field in his younger days.

In James’ freshman year at SVSM (1999), the Fighting Irish were in a heated Division IV qualifying game against the Wickliffe Blue Devils. James, a 6’6″ junior varsity wide receiver who hadn’t participated in a single snap for his team yet, was watching from the sidelines.

Maverick Carter, who is now James’ business manager, was the number one option at wide receiver for The Fighting Irish at the time. However, on this night, Carter was dealing with an illness. With the team struggling to produce points and its star receiver ailing, SVSM quarterback, Chris Wooley, felt his team needed a lift.

Early in the season, James’ talent on the gridiron became apparent to Jim Meyer, head coach of the Irish. Despite being just 14-years of age, Meyer and Wooley knew the future NBA superstar was due for a promotion to the varsity squad.

It was time to insert James into the game, and Wooley, who recently recanted the story in a Bleacher Report article written by Joon Lee, knew it…

“We have to get this kid in the game,” Wooley thought to himself as he gazed at the zero on the scoreboard.

“Put him in! Put him in!” Wooley shouted as his reluctant coaches stared back. “I don’t care if he only knows one play or what the problem is that you won’t put him in the game. Put him in.”

With one quarter remaining, Coach Meyer obliged to Wooley’s request and inserted James into the lineup. Meyer and Wooley kept the plays simple for James, limiting him to fade routes and screens. Between plays, James and Wooley began using hand signals for audibles and route adjustments.

James had an immediate impact on the game. If Wickliffe defenders tried pressing him at the line of scrimmage, the future Cleveland Cavalier simply burned them on fade and out routes. If the defense gave James space at the line, Wooley would throw screen and dump passes to get him into the open field.

In that single quarter of his first varsity game ever, James scored two touchdowns and recorded more than 100 receiving yards. The Irish lost the game, 15-14, but James had given his team a fighting chance.

I have several buddies to this day that said I probably threw to him too much,” Wooley said of James. “I would argue that I didn’t throw to him enough.”

James went on to become a two-time all-state receiver for the Irish. In his sophomore season, James caught 42 passes for 752 yards and 11 touchdowns. It wasn’t long before colleges all across the NCAA were offering scholarships. However, Willie McGee, James’ childhood friend and junior year quarterback, knew that the athletic “Kid from Akron” was destined for a career in basketball.

Early on, it was a mutual love it seemed to me between basketball and football,” McGee said. “Maybe around junior year, you knew basketball was going to be his ticket.”

Matt McDonald, who also played quarterback for the Irish in James’ Junior year, was told to keep it simple when throwing the ball to James. “Just throw it up to LeBron,” coaches would tell McDonald.

Whether it be on a basketball court or football field, James commands the attention of his teammates as a leader. One NFL executive told Bleacher Report that James could’ve been one of the greatest tight ends of all time. In fact, in his two seasons on the field with SVSM, James recorded 27 career touchdowns (7th in school history) and 99 receptions (3rd in school history).

Now, Wooley and McDonald, who are both Cleveland Cavaliers fans, remain in awe of everything their former teammate has accomplished over the course of his illustrious career.

I knew he would be a pro someday, but I didn’t expect this,” Wooley, who now works at Garfield Heights Middle School, said. “My thought is, ‘Wow LeBron, you’ve gotten so popular that reporters are interviewing guys from 15-plus years ago who played a sport with you that you’re not even famous for.’”

“If you’re on a team with that guy, you start to believe that anything is possible.” 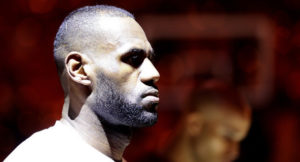