The fans inside the Quicken Loans Arena on Monday were looking forward to seeing the newest member of the Cleveland Cavaliers make his debut on the night. Unfortunately, Andrew Bogut‘s time on court was abruptly cut short due to a leg injury.

The incident happened with 11:39 left in the second quarter as the 7-foot center tried to contest the shot of Okaro White. However, after a fake, the Miami Heat swingman made his move to the basket and hit his knee directly on Bogut’s left shin.

Many were left shocked seeing the 32-year-old Australian go down after only seeing 58 seconds of court time and  grimace in pain as they feared the worst for him. LeBron James even admitted to hearing his leg crack which is not a good sign for Bogut and the Cavs, who recently agreed on a deal with the hopes of providing the team with an experienced inside presence off the bench.

After tests, doctors determined Bogut fractured his left tibia. Although a timetable has not yet been determined, he’s likely out for the rest of the season. 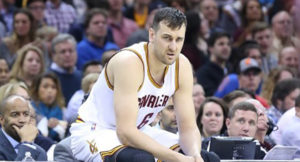 JUST IN: Andrew Bogut talks about his addition to the Cavs
Related TopicsAndrew BogutCavaliers