One year after LeBron James’ migration to Miami, the Cleveland Cavaliers limped out of a 19-63 season with a single bittersweet purpose: rebuild. This construction project’s foundation was the 2011 NBA Draft. Three picks after selecting Kyrie Irving first overall out of Duke University, Cleveland spent their fourth pick of the Draft on Tristan Thompson out of the University of Texas. Like Texas, Thompson has given the Cavaliers everything they could ask for, but bigger. Whether it’s running the floor, denying the most talents scorers or coming down with the most clutch offensive rebounds over multiple defenders, “TT” has shown Cleveland he was worth the first round pick; but in the Cavs’ magical 2015 playoff run, he has shown he’s worth something much bigger.

Before LeBron James and Kevin Love took the chance on Cleveland, Tristan Thompson made an equally big bet on himself in the summer of 2014. Turning down a four-year, $52 million contract takes a lot more than confidence after just three years in the league. It takes a laughable leap of faith, maybe even a little cockiness. After starting in 164 straight games from 2012 to 2014, Thompson only started 15 times this season; but he was never a benchwarmer. Hungry and humble, Thompson surpassed expectations while playing within the boundaries of a team stacked with superstars. With Kevin Love’s liabilities on defense, Thompson earned valuable minutes to showcase his greatest attribute: athleticism. Like his idol, Dennis Rodman, Thompson brings unmatched energy, which flooded the void of Anderson Varejao’s season-ending achilles injury. In fact, despite 400 fewer minutes this year than last, he finished with 75 percent more blocks and a seven-percent increase in field goals. Accepting his role and playing off of LeBron James, Kyrie Irving and Matthew Dellavedova has made Thompson an indispensable asset of the team. His loyalty and aggressiveness are priceless, and he’s made a powerful case for a mass contract after this postseason. The most amazing blessing with a boulder like Thompson is what he’s provided Cleveland in the playoffs: a silver lining to the loss of Kevin Love.

Starting since the Semifinals against Chicago, Tristan Thompson has been an unstoppable force for Cleveland. His offensive arsenal isn’t the most glamorous and his defensive rotations can be inconsistent, but like his teammate Matthew Dellavedova, he out-works everyone on court:

Thompson is averaging 8.9 points, 9.8 rebounds, 1.3 blocks and a very dependable 57.5 shooting percentage in his first career postseason. He is the perfect combination of aggressiveness and efficiency, posting the highest offensive rating and second most offensive rebounds in the playoffs. Defensively, Thompson is tied with LeBron James for playoff blocks and his paint presence is a prime reason why the Cavs have surrendered the fewest points per game in the postseason. Cleveland is outscoring the Hawks +8 with Thompson on the floor, which is even higher than LeBron James’ net rating. He’s played over 40 minutes each game in the Eastern Conference Finals, and with his consistent production, Thompson will finish this season with a generous contract. LeBron James feels that Thompson’s contract will mean more than an agreement; He actually sees it as an understanding between Tristan and the city of Cleveland:

Obviously, coming from one of, if not the most, prideful Ohioan in the Buckeye State makes this the ultimate Cavalier compliment. While more speculation and rumors say Kevin Love’s door is closing, Tristan Thompson’s door is undoubtedly opening with each step Cleveland takes towards its first championship in 50 years. Thanks in large part to TT, the Cavs have their best shot to finish the job. They have surprised critics and Hawks fans with persistence, teamwork and the chance to become the second team in NBA history to sweep a No. 1 seed in the Eastern Conference Finals. 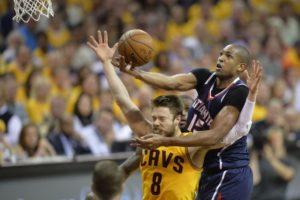