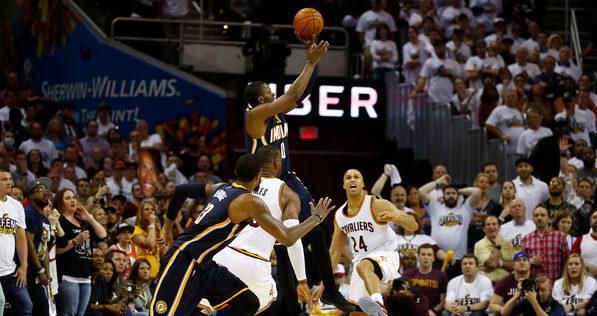 On Saturday night, the reigning champion Cleveland Cavaliers survived a scare. C.J. Miles of the Indiana Pacers had a clean look at a potential game-winning buzzer-beater, only to see it hit front rim and fall short.

As soon as it was an official Wine and Gold winner, LeBron James and his Cavaliers were onto the next one, moving on from Game 1 and planning for Game 2.

In a postgame presser, one journalist was brave enough to ask the ‘what if’ question. What if former Cavalier, Miles, had drained the potential game winner?

“There’s no way you can even answer that question,” James told reporters. “If I didn’t get the block last year in the Finals, what happens? If Kyrie didn’t make the three, if Steph would’ve made the three … you can’t look at a game like that.

Playing the ‘what if’ game can drive a sports fan nuts, looking back at past games, past draft picks and everything else with it. Cleveland aren’t going to do that to themselves. They won the game and have no doubt they deserved it, so on to the next one.