Last week, during an airing of TNT’s Inside the NBA, Ernie Johnson, host of the show, asked members of the panel what they thought of LeBron James’ recent comments regarding the Cavaliers’ current roster situation.

When Johnson asked Charles Barkley to fill in the blank, saying: “LeBron James’ comments were -,” Barkley replied with a blunt answer.

Inappropriate, whiny. Uh, all of the above,” Barkley replied. “The Cleveland Cavaliers, they have given him (James) everything he wanted. They have the highest payroll in NBA history. He wanted J.R. Smith last summer, they paid him. He wanted Shumpert (Iman Shumpert) last summer. They brought in Kyle Korver…”
“He (James) is the best player in the world. Does he want all of the good players? Does he not want to compete? He is an amazing player, but this notion… They’re the defending champs, and for him to be trying to hold anything over Dan Gilbert’s head…”
“And I love all of these wild, punk-ass reporters on television, who’s afraid to call LeBron a great (player). LeBron is a great guy, but this notion that he’s got to have all of the best players on his team… He’s got Kyrie Irving and Kevin Love. He wants everybody. He doesn’t want to compete. He wanna be the favorite all the time? It just pissed me off that a guy that great doesn’t want to compete.”

James has recently responded to Barkley’s on-air comments. After Cleveland’s 124-116 win over the Brooklyn Nets on Friday night, James was asked what he thought of Barkley’s opinions.

He has to do that. I mean, it’s good for the ratings,” James said with a calm but curious demeanor. “That makes no sense in the world. Ever since I picked up a basketball at age nine, I’ve competed every single time,” James said as he shook his head.
“You can never question that about me. But that’s Charles (Barkley). He’s the guy who has to sit on that panel and say things like that. But at the end of the day, that means absolutely nothing. I wasn’t even watching (TNT) last night.”

After Monday night’s 104-97 loss to the Dallas Mavericks, James lashed out at Barkley for his constant criticism. Josh Healy of The New York Daily News has James’ comments in his recent article.

I’m not going to let him disrespect my legacy like that,” James said. “I’m not the one who threw somebody through a window. I never spit on a kid. I never had unpaid debt in Las Vegas. I never said, ‘I’m not a role model.’ I never showed up to All-Star Weekend on Sunday because I was in Vegas all weekend partying.
“All I’ve done for my entire career is represent the NBA the right way. Fourteen years, never got in trouble. Respected the game. Print that.”

Now, James is receiving support from his long-time friend and former teammate, Dwyane Wade. After this morning’s shootaround, Wade justified The King’s response.

Thank God he finally said something,” Wade said. “LeBron, a lot of guys take a lot of shots at him—for whatever reason. He just has kept his mouth closed and continued to focus on what he needs to. But it’s about time he said something, man. Guys ride him, especially ex-players. When you have a history, when you can go and Google your history, you better be a little careful with what you say. Sometimes, when guys get a microphone in front of their face, they just talk and talk and talk and forget about their history. We all make that mistake, but especially that guy on TV. He acting like he just walks on water. And I like the fact that LeBron called him out and told him about himself a little bit. Humble yourself. LeBron is who he is. We all have flaws. But when your flaws are a little bit more, you should shut up. I’m glad LJ finally said something and stood up for himself from that standpoint. He said there’s a new sherrif in town. So I’m excited to see what’s next.”

Wade on LeBron's comments on Barkley: "Thank god he finally said something." 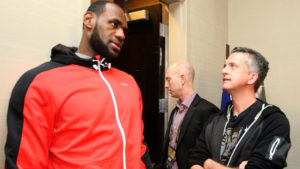