LeBron James has been vacationing for the most part this summer. He’s taken trips around the world, but it looks like he’s had to get back to business a little earlier than usual.

James and rapper Drake held a kickball game with other celebrities and players up in Toronto, Canada on Saturday. Oklahoma City Thunder’s Kevin Durant and Cleveland Cavaliers forward Tristan Thompson were also in attendance to play in the game.

When asked if he was ready to take a loss today, Drake said, “I haven’t taken a loss all week, man!”

Here’s the video of everyone prepping before the game, until they had to postpone due to some severe rain. 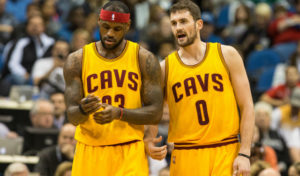