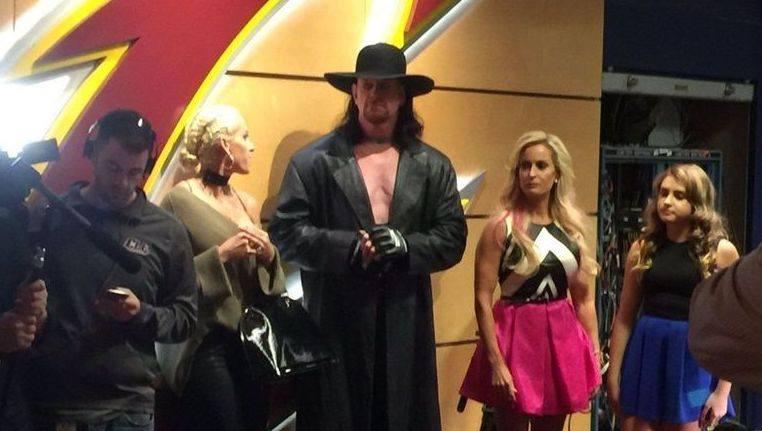 It’s almost impossible to draw LeBron James’ focus away from basketball when he enters an arena. Before or after a game, LeBron is focused on what he has to do, whether it be preparing to go out and win, or recovering from a tough contest. Needless to say, it’s very unlikely you’ll be able to cross paths with the king when you’re in the same arena, and unfortunately, WWE legend “The Undertaker” found out the hard way.

Remember that surprise appearance The Undertaker made for the Cleveland Cavaliers’ season opener against the New York Knicks? Players had seen Undertaker standing in the hallways next to the Cavs locker room, and went to greet him and take photos. One player we didn’t see take a photo or even greet the WWE wrestler was LeBron James. James was focused on receiving his ring and starting off the season in emphatic fashion, and he did just that.

James was supremely focused before the outing, and it showed, as he recorded a triple double to start the campaign in winning fashion. It was perfect for the everyday Cavs fan, but the Undertaker was on the wrong side of pleasantries. James arrived at the Q before the dead man himself, and despite waiting for an hour and taking snaps with multiple Cavs players, his wait for a photo with LeBron went unfulfilled.

Before Game 5 of the NBA Finals, James was seen wearing an Undertaker t-shirt, so it was easy to assume that a future meeting between the two was inevitable. According to Joe Vardon of Cleveland.com, this is something he has seen before, and without a scheduled meeting, it is unlikely you’ll get a glimpse of the king.

“Here’s a life lesson. If you don’t have an appointment, don’t already know James personally, aren’t a business associate or a small child, the odds of “meeting” James before or after a Cavs game in or near the locker room are not great. I once saw Houston Astros stud second baseman Jose Altuve try to get a meeting with James after a game against the Houston Rockets in Texas. The request came through various team PR officials. Let’s just say James had no interest.

“Another rule. James is not cool with someone purposefully trying to make money or gain fame through him, away from the court. In other words, no PR stunts that don’t benefit James. He wore an Undertaker t-shirt. For him, that’s enough.”

Getting a meet and greet with the four-time MVP and three-time NBA Champion is a tough ask. Nothing will get in James’ way when it comes to focusing about basketball, not even a chance to meet the Undertaker on opening night.