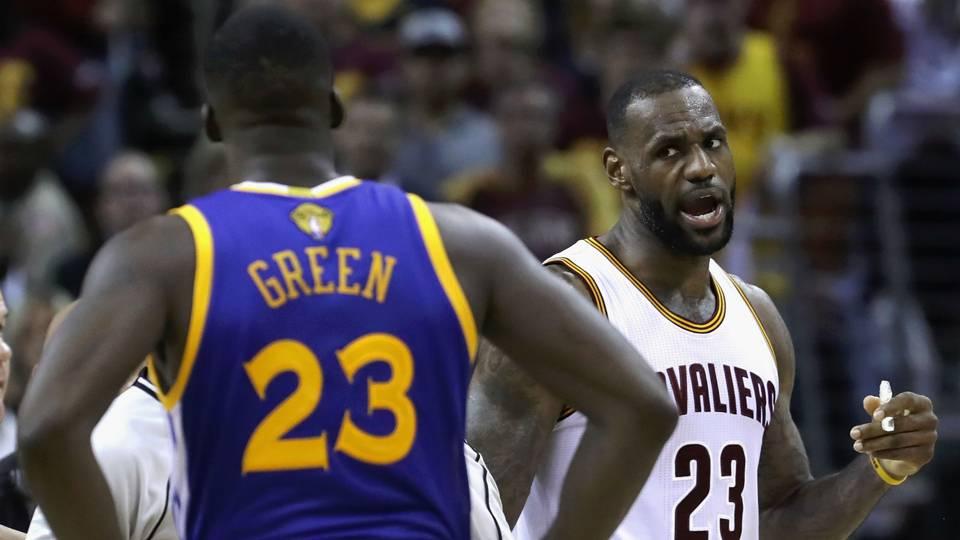 During their championship parade celebration yesterday afternoon, Golden State Warriors forward Draymond Green decided to stand out from the rest of his teammates by wearing a tee shirt that read “Quickie” across the front — an obvious play on the Cavaliers’ arena sponsor, Quicken Loans.

LeBron James, who seems to always be informed, took note of Green’s shirt and posted a hilarious response on his Instagram account, simply saying: “That’s what she said, HUH?!?!?”

During his speech to the Warriors faithful, Green snuck in another jab at James — this time for starting a “super-team.” Remember, this is coming from a guy who has three other All-stars on his team (four including Green).

In a recent appearance on the “Road Trippin’ Podcast” with his Cavaliers teammates, Richard Jefferson and Channing Frye, James took some time to distance himself from that label, while also getting back at Green.

Via William Lou of The Score:

“I mean in 2003, the Lakers combined Karl Malone, Gary Payton, (Shaquille O’Neal), and Kobe (Bryant),” James said. “And in 1996, when (Michael) Jordan was retired, the Rockets joined Charles Barkley, Hakeem Olajuwon, and Clyde Drexler all on the same team. …

“I definitely didn’t start the super team, if that’s what he’s trying to say.”

To be fair, the Cavs and Warriors could both be considered “super-teams.” Cleveland has two former No. 1 overall picks in Kyrie Irving and James, as well as a former All-NBA rebounding machine in Kevin Love. As for the Warriors, they have two of the best three-point shooters of all-time in Stephen Curry and Klay Thompson, a four-time scoring champion in Kevin Durant, and a two-time All-Star in Green.

In his closing statements, James took one last subtle shot at Green.

“I just feel like that it’s great that on the day you’re celebrating your championship, my likeness and my name is in your head. I love that,” James said with a smile.