LeBron James and the Cleveland Cavaliers took a 3-0 series lead over the Boston Celtics on Thursday night, and have a chance to end the series on Sunday in Game 4. A sweep would surprise no one, but its looking more likely as the Cavs have had full control of the series from the opening tip.

A seemingly easy opponent when Boston locked up the seventh seed, David Blatt has kept his team focused and collected on the task at hand:

“We’re playing a fine opponent, they’re making it very difficult for us, they’re challenging us, competing with us, and we’re doing what we have (to) to win. But it’s not coming easy. We’re working very hard to be successful in this series, and I think that’s a good thing because that makes you stronger, and that’s what you want.

LeBron James has also had a hand in the Cavs victories, to say the least. He’s been an absolute beast in this series, averaged 27.0 points, 8.7 rebounds, 6.0 assists, 2.0 steals, and 1.7 blocks per game. In what is supposed to me one of the more lopsided series, Cleveland is averaging 105 while Boston is scoring 95.3 per game. Its just about a double-digit differential, but the LeBron and the Cavs are fine with now blowing the Celtics out after winning Games 2 and 3 by eight points each.

The play of Kevin Love and J.R. Smith really sparked the Cavs, especially in a game that saw Kyrie Irving not score a field goal until the second half. Love scored 23 points and hit six three-pointers and J.R. Smith was his usual tough-shot-making self.

“[Kevin’s] played an unbelievable series. He missed some shots in Game 1, but his impact on the floor, to make shots, and rebound. He’s been highly criticized… He’s definitely used that as motivation, I believe.”

“It doesn’t matter whether he’s playing in New York, in Cleveland, or in Denver, all that matters is winning. I think it’s unfair to him. He comes out every day to get better and help our team win. He’s a great teammate and a great guy.” 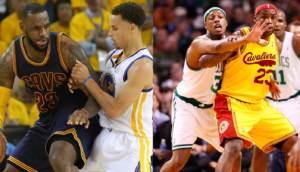