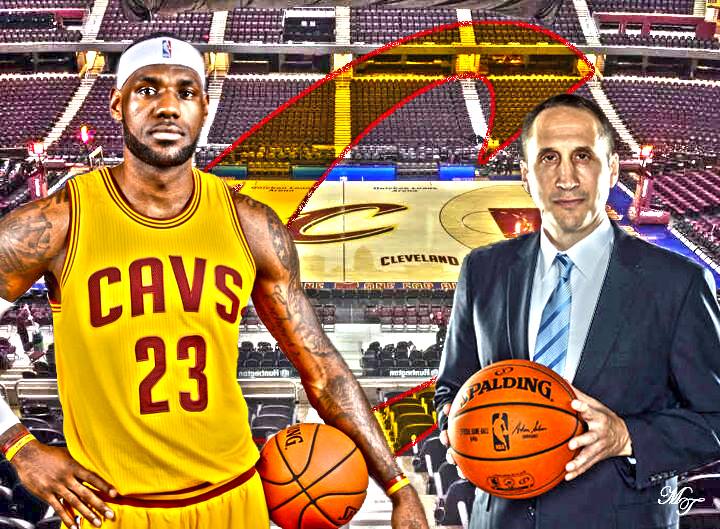 The 2014-15 NBA season will be far different from anything Cleveland has recently seen from their Cavaliers. Prior to the offseason, Kyrie Irving was an All-Star who was constantly hampered by injuries and a lack of support from his teammates. Mike Brown was the Cavaliers coach who didn’t seem to have the confidence of his team. Cleveland was headed towards another lottery season where they would get the number 1 pick. Although that pick would bring a young player with promise to the Land, the playoffs still seemed unreachable in the near future.

Now, following the free agency frenzy of the summer, LeBron James is back in a Cavs uniform and ready to lead a young squad to the playoffs after 4 very successful years in Miami. Kevin Love is ready to finally compete for something other than rebounding and double-double records. Kyrie Irving is coming off of a FIBA World Cup Championship and an MVP. The highly praised and experienced European coach David Blatt is fresh off of a European Championship and Coach of the Year award with Israel’s best team Maccabi Tel Aviv.

With championship aspirations for years to come, Cleveland must quickly adjust and learn not only how to play with each other, but also how to play under Coach Blatt’s system. Despite his lack of familiarity of the NBA, Blatt has earned accolades that prove his abilities as a coach in a universal perspective of basketball. Here’s a look at his achievements as a European coach:

There has been speculation that adding Coach Blatt before recruiting LeBron James makes the Cavs vulnerable to a bad player-coach relationship. Ideally and recently, many teams are allowing their superstars to decide whom they’d like to be coached by, thus minimizing the risk for tension. However, Cleveland won’t need to be worried about chemistry and communication. As Coach Blatt stated, he and LeBron “both have the same goal in mind and that’s to do something special for the Cleveland Cavaliers and the state of Ohio.”

{adinserter 2}Hauling over 30 years of European basketball experience to Ohio, David Blatt is bringing a winning culture to a team full of winning expectations. He’s known for using a shooting power forward such as Kevin Love to help spread the floor, and giving opportunities for his playmakers like LeBron James, Kyrie Irving, and even Dion Waiters who play the best when they’re creating their own shots; every player could benefit from Blatt’s offensive coaching style. However, winning a championship takes more than mastering a coach’s system. Leadership by the Cavs most important veterans will be essential if LeBron and Coach Blatt wish to do something special in Cleveland.

LeBron James will be taking on the biggest leadership role with this team, serving as an on and off-court coach for a lot of the younger guys. Although there are plenty of veterans on the team, LeBron James offers experience and tenacity unmatched by almost anyone in the league. As he said in his media day interview:

The Cavs will be going through a lot of “firsts” this season. LeBron will be going through an extremely important leadership role that will be somewhat demanding at times. Kevin Love will finally be expected to perform and mesh with his teammates, including his first potential playoff appearance. Kyrie Irving will show that he can not only score, but also play the role of a passing point guard who frequently leads an offense. David Blatt’s concerns aren’t whether or not players will buy into his system; rather, Blatt’s highest priority is keeping his team settled and mentally prepared to enter the grind of a season of work, expectations and criticism.

A couple questions going into training camp: How can Cavs players mesh with one another? Who will have the ball in their hands the most? Do the Cavs have enough defensively to compete against the league’s top offenses? And most importantly, can the Cavaliers players stay healthy throughout the season? One thing is for certain: there will be slight transition period, but both Blatt and James expect it go smoothly through training camp as players find their roles within the team. Thus far in training camp, LeBron has only had good things to say about Blatt’s coaching. Now less than a month away from their home opener against the Knicks, James and Blatt are fully aware of the opportunities they’ve been presented and are equally determined to bring something special to the city of Cleveland.