LeBron James & Cavs Are Excited To Have Channing Frye With Cavs The Cleveland Cavaliers are moving on from Anderson Varejao as they have acquired stretch forward/center Channing Frye. Frye comes in having played 10 NBA seasons with career averages of 9.2 points, 4.9 rebounds, 1.0 assists, 0.6 steals, and 0.7 blocks. Those numbers don’t sound too impressive, but that’s because he’s always seemed to play sparingly. In his best season, he averaged 12.7 points, 6.7 rebounds, 1.2 assists, 0.6 steals, and 1.0 blocks while also shooting 39% from downtown and hitting 2.2 three-pointers per game.

At 6’11, the nearly 40% three-point shooter will provide much needed spacing at the four/five spot for the Cavs. Frye can space the floor out for drivers like LeBron James and Kyrie Irving, and even for Kevin Love while he works in the post and possibly attracts double-teams.

Here’s a look at Frye’s shot chart so far this season via Vorped: As tough as it was to let Andy go, Joe Vardon of Cleveland.com spoke with LeBron James on Channing Frye.

“We’re excited to have Channing come here for sure,” James said. “I think he can add something to our team, a veteran, a guy who’s played some really good ball in his career, so we’re excited about that. But like I said about Andy, that’s the worst part of the business when it comes to this game.” 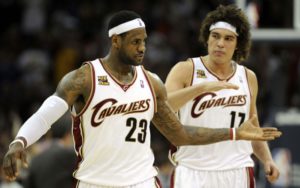