Much has been said about how Derrick Rose’s career was derailed by his oft-injured body and this tidbit of trivia from Reddit manages to highlight that while also showing the all-encompassing greatness of another superstar in LeBron James.

As of the conclusion of the 2016-2017 NBA season, Rose has played in 470 total regular season games since being selected first overall by the Chicago Bulls in the 2008 NBA Draft. James, on the other hand, has 471 regular season games in which he has posted at least 25 points, five assists, and five rebounds per Basketball-Reference.com.

That’s the most by any player in NBA history and James could add more to it in the years to come with the four-time MVP showing no signs of slowing down. He just had 43 25-5-5 games last season, wherein he put up 26.4 points, 8.7 assists, and 8.6 rebounds per contest.

Rose is only 28-years-old but with the litany of injuries his body has taken over the years, it’s not a stretch to think that he’ll miss a chunk of games moving forward. That’s a key factor for teams this offseason when considering a contract offer for Rose, who is currently an unrestricted free agent.

The Chicago native and 2011 MVP finished the 2016-2017 season with very solid averages of 18.0 points, 4.4 assists, and 3.8 rebounds per game. However, there’s no guarantee if Rose can put up these stats for an acceptable amount of games that will make any team’s risk in acquiring him truly pay off. 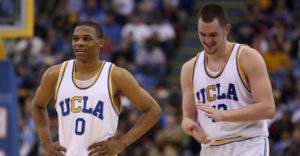