Is Kyrie the New Face of USA Basketball? The United States Men’s National Team has had big players and outstanding teams in the past. The most memorable so far is likely the Dream Team from the 1992 Olympics which included Larry Bird of Boston, Michael Jordan of Chicago, Magic Johnson of the Lakers, Karl Malone from the Jazz, and David Robinson of San Antonio among others. They would go on to win by an average of 43 points a game, with the closest game being a 32 point blowout of Croatia in the Gold medal game. Team USA played the most complete tournament as a team with each player doing their respective parts to win.

With Team USA surprisingly losing to Argentina in the semifinal in the 2004 Olympics, winning the following Olympics in 2008 was made an absolute priority as they played each game embracing their motto: It’s the gold, or its failure.” Led by Los Angeles Lakers guard and captain Kobe Bryant, Team USA went undefeated throughout group and knockout rounds, as they won the gold medal against Spain in the final. Bryant came up clutch in the 4th quarter of that game, coming up with big buckets when Spain was inching closer.

Team USA came up with very similar results in the 2012 Olympics. With an older Kobe Bryant, Cleveland’s own LeBron James, coming off of another MVP season and first NBA championship with the Miami Heat, assumed leadership of the team. With Tyson Chandler as the team’s only experienced Center (the other being Anthony Davis, a rookie who hasn’t even played an NBA game yet), Coach Mike Krzyzewski often played “small-ball” using all the playmakers he could. That forced James, Carmelo Anthony, and Kevin Love to play the Center position. The team once again went undefeated and once again overwhelmed Spain in the Gold medal match.

Now, being 2 years away the 2016 Olympics, Team USA sent its 2nd best team to Spain to play in the 2014 FIBA Basketball World Cup and compete for a spot in those Olympics. With players from the 2012 Olympic team like Kobe Bryant, Tyson Chandler, Andre Iguodala, Carmelo Anthony, and Deron Williams entering the later phases of their careers and trying to avoid injuries, players not familiar with Team USA and international play would have to step up and play for a chance at the Olympics. Following injuries and players opting to rest for the summer, the only returns from the 2012 Team were James Harden and Anthony Davis. However, the USA set out to show the world that their ‘B-team’ could do just as well as their ‘A-team.’

Team USA had great overall performances, and individuals like Harden, Stephen Curry, Kenneth Faried, Anthony Davis, Rudy Gay, and Kyrie Irving each stepped up to help blow out the competition game after game. Facing Serbia in the gold-medal game, Harden, Curry, and Faried were expected to lead Team USA to the victory as they were the three most consistent players leading up to the finale. Serbia started out expectedly strong whereas the U.S. seemed to be more laidback. However, once down 12-5 with 6:36 left in the first quarter, it was Kyrie Irving who stepped up his game, scoring his first basket on the following possession. He finished with 15 points at the end of the first quarter to give Team USA a 35-21 lead. Irving would lead the U.S. to the Gold medal with a 129-92 victory. He finished with 26 points on an efficient 10/13 from the field, including a perfect 6/6 from beyond the 3 point line. Harden also put in a solid 23 points, but Irving’s composure and resourcefulness made his performance that much more impressive. With Irving being just 22 years old, he’ll have a lot of chances for international play in his future, assuming he can stay healthy. Not many expected him to lead as he did, but he has shown his growth and maturity as a player. Now that he’ll be playing alongside LeBron James and Kevin Love, he’ll be able to further develop his off the ball and passing game in order to become the best point guard in the league. With that role, he’ll be Team USA’s leader for years to come. 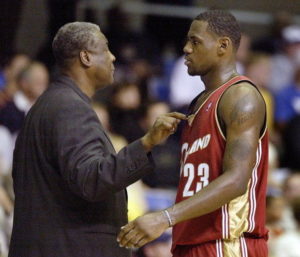