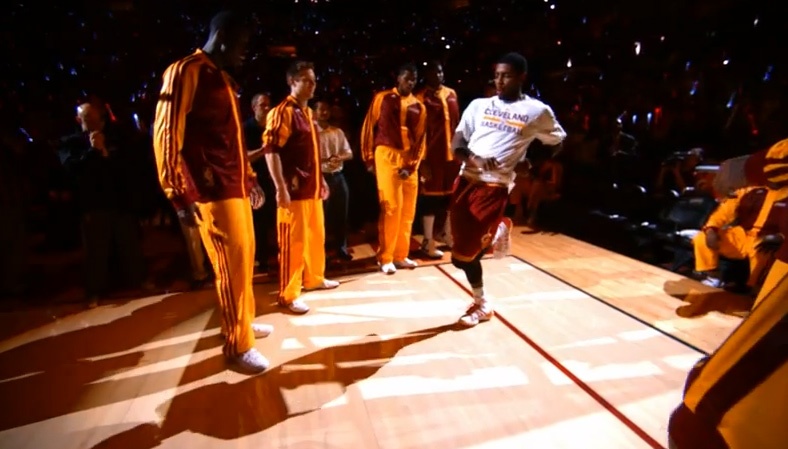 Kyrie Irving: the point guard extraordinaire, the up-and-coming superstar talent… the groovy dance floor maestro? His talent extends from breaking ankles on the court, to breaking it down on the dance floor. He’s had quite the career in both categories. His basketball skills have been extensively recognized, so let’s take a look at his top 5 dance moves!

While meeting with a group of kids in the offseason, Kyrie breaks into dance mode before showing the kids a dunk.

4. Kyrie with nothing but himself, his millions and his dance moves!

Irving broke out into a dance right after he signed a 5 year/ $90 million contract extension last summer with the Cavs. It just about sums up his excitement… in staying with the Cavs for another 5 years, not so much the $90 million. Ok, maybe both.

Pre-game Dance routines are a commonplace in the NBA. But nobody does it quite as groovy as Irving does. Check him out as he pauses during introductions to pull off a slick dance move… right before icing out Mathew Dellavedova! Should we assume Irving ingeniously pulled off this move to avoid shaking hands with Delly? Nonsense, they have the Aussie connection; they connect in spirit.

2. Kyrie Graces a Community with his Groove

Unicef and the NBA had a community initiative where they visited South Africa two summers ago. It was in a classroom filled with lively kids when Irving broke out into this sudden funkiness.

Be prepared to witness Kyrie’s best dance move on the next page!

1. Kyrie’s Tango with Players On Court

We all know how great of a dancer Irving is off the court. But, without a doubt, his best dance moves are on the court. Let’s check out some of his best work, including a tango with Brandon Knight and a waltz with Damien Lillard.