The renewed rivalry between the Cavs and Wizards has fast-paced offense written all over it. Here, Kyrie pushes the ball up the court and tests LeBron’s vertical who finishes a crazy alley-oop!

CONTINUE ON THE NEXT PAGE FOR KYRIE IRVING’S SICK CROSSOVER ON KRIS HUMPHRIES! 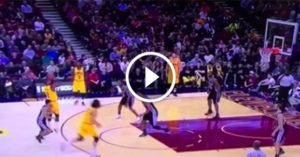 JUST IN: Top Cavs Highlights At The Half Against The San Antonio Spurs