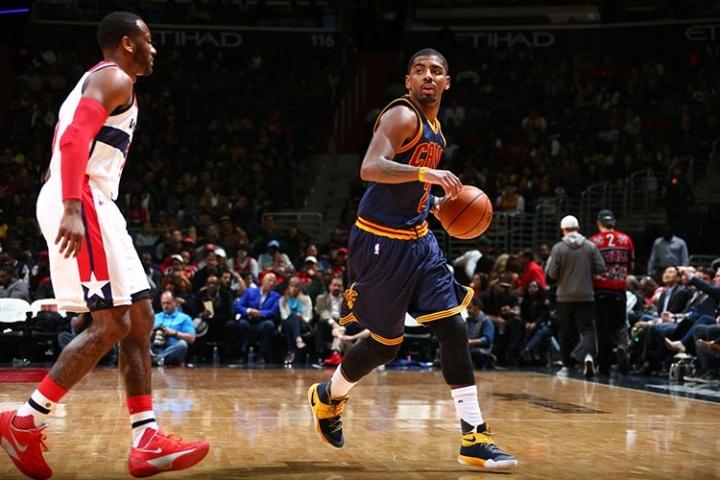 Kyrie Irving and John Wall have been together in plenty of conversations over the past few years. But the Cleveland Cavaliers’ court general oftentimes get the nod over the Washington Wizards’ backcourt ace, whether it’s for a spot in the All Star starting five or Team USA lineup.

In the Cavaliers’ most recent visit to the Wizards’ home floor, Irving and Wall got to match up for the first time this season. Prior to game day, the hype machine accelerated its motion when Wall made some shady comments towards the fact that Irving, once again, is poised to become an All Star starter this year.

Unfortunately for Wall and the Wizards, his words sparked an ill-advised decision from some of the team’s personnel that may have caused Irving to explode for 19 points in the fourth quarter en route to a 121-115 Cleveland win. Chris Haynes of the Northeast Ohio Media Group took notice of this instance in one of his articles while also getting a few quick reactions from some of the Cavalier players.

In the second quarter during a timeout, the Wizards’ in-game entertainment crew presented a spoof that ended up biting them in the rear. It was intended to be lighthearted and humorous, but failed miserably.

On the Jumbotron it showed fans attending the game in Cavaliers apparel being asked in the concourse who belonged in the All-Star Game between Wall and Irving. Every single fan said Wall, and you could tell they were instructed to answer that way.

The bit went on long enough that it got the Cavaliers’ attention from their huddle, and they didn’t take too kindly to it.

Irving’s backcourt pal, J.R. Smith, gave his thoughts on what appeared to be a tasteless promotion.

“Me personally, I didn’t like it but, I’m sure if I was on the other team I would have liked it. I think it’s certain things that need to be left alone and that’s one of them — especially somebody who’s earned the respect that he’s gotten.”

Tristan Thompson has been Irving’s teammate ever since they entered the league in 2011, and he also expressed his support for his draft class buddy.

“If they feel they’ve got to make a spoof to get some more votes for John Wall, it is what it is. Kyrie is playing great for us. Fans are going to vote for whoever they want to see.”

Ultimately, Kyrie Irving was not at all fazed with everything.

He was right. There was no need for further talk because even the scoreboard says it all.

Wall played 40 minutes and finished the night with 20 points, 12 assists, and seven turnovers, with some of his baskets being made when the game was already decided. Meanwhile, Irving dished out his best performance of his young season so far, playing 33 minutes and ending up with 32 points on a very efficient 14-of-22 shooting, five rebounds, three assists, a couple of steals, and a block.