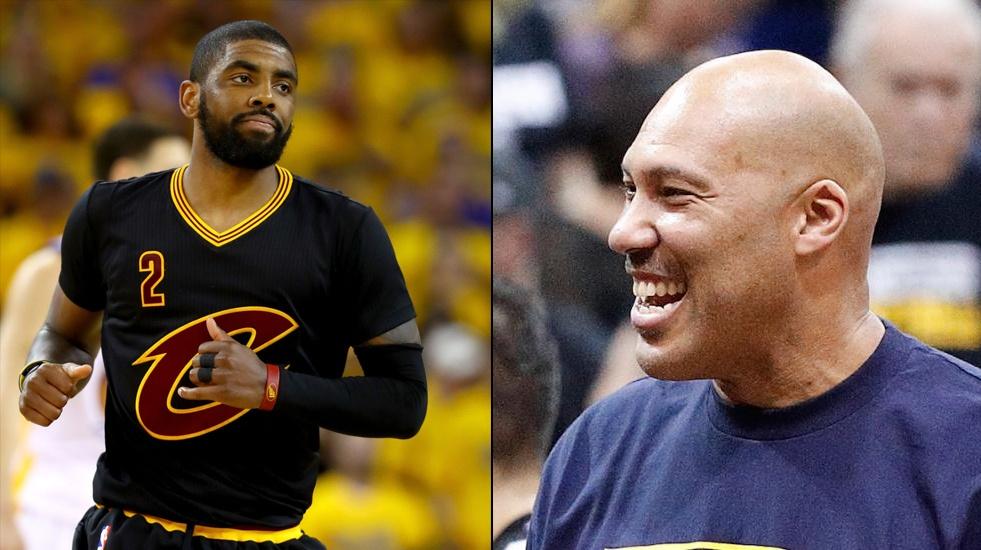 Cleveland Cavaliers point guard Kyrie Irving knows a thing or two about what Lonzo Ball is going through with his father, LaVar Ball. You see, Irving’s father, Dred, played a LaVar-like role in the early stages of his career. However, there came a time when Irving had to break those chains, and he believes Lonzo needs to do the same.

“I’m sorry, LaVar, you’re not going to be in every hotel room that Lonzo is going to be in,” Kyrie said as a guest on Uninterrupted’s “Road Trippin'” podcast with Richard Jefferson and Channing Frye. “You’re not going to be everywhere and part of his life as he continues to grow up. You got to let go. He’s 19-years old. Don’t get me wrong, I don’t want it to bypass him being a father, but he’s got to let Lonzo be Lonzo for the long haul.”

Irving, now 25 years of age and six seasons into his career in the NBA, went on to say that he had a talk with his father about making his own decisions at a young age.

“I had to have a talk with my dad and I was just like, ‘Man, Dad, I love you but I’m going to make my own decisions,'” Irving said. “And he told me, when I turn 18, I’m responsible enough for myself to make my own decisions and he’s going to be there to help along the way. But when I turned 18, like, I got my first tattoo. I got my ear pierced. I just started doing my own thing.”

Lonzo, a point guard by trade, averaged 14.6 points, 7.6 assists and 6.0 rebounds in one season with the UCLA Bruins. Like Irving was in 2011 (first overall selection by the Cavaliers), Lonzo is expected to be a top pick in this year’s NBA Draft.

“I don’t know what his future plans are for his sons,” Irving said of LeVar Ball. “I don’t know the dynamic of their relationship. Me and my dad, I always wanted to be just an individual and you guys always know that. And since I was a kid, my dad never fought that. He never fought that. And when it was time to let me go and be that individual after eighth grade, he stopped coaching me and he was like, ‘OK, from high school on, you’re on your own. Like, I’m going to be here for advice, but from this point on, I’m just going to be a parent. I can’t be your coach for the rest of your life. I can’t be the Joe Jackson of just staying there on every step and just calculating every move.’ But, man, I just want to see what he has now. I mean, Lonzo, we’re just excited for him to get to the league now.”

Irving, who is considered to be one of the best point guards in the association, then explained how difficult it will be for Lonzo to make it in the NBA with all of the added pressure from his father, saying: “we’re going to come at him.”

“We’re going to go at him because he’s going to be a rookie,” Irving said of Lonzo. “He’s coming into the point guard position. That right there is … I mean, you think about it, you go through the top 10 point guards in the league, no matter what LaVar says or what he believes, we’re all going to come at him and that’s just competition outright. Then you start adding, I mean, we’ve seen it. We’ve seen people be implemented into the spotlight and it just draws an even bigger target on them. We’ve seen it.”

Irving says he respects the business foundation that LaVar has laid for his family, but he also asked him to “relax a little bit” with regards to his outspoken comments.

“We all respect the foundation he’s laid. I’m going to speak from the parent perspective first and then as a player,” Irving said. “As a father, the foundation he’s laid for his children, I couldn’t be any (more) proud of him. I don’t listen to the comments. … Just as a parent, he’s opened up the door for his kids. He was the one that put the ball in their crib. As cliché as that sounds, he was the one that pushed them in that direction to play basketball. And now they’re talented and able to have their own AAU team and able to have their own brand and be able to travel on their own merits, not looking towards the big-time companies to sponsor their team. I mean, they’re controlling it within the family and I respect that, from that aspect.”

“Now, when he starts going off and saying, ‘I could beat Michael Jordan 1-on-1′ and starts going off and he compared Lonzo to Uber and taxi, come on. Just relax a little bit. Take a step back and realize the impact that you can make, not for the moment now, but for the future. Lonzo is going to be in the NBA regardless. But at the end of the day, he still is going into another world that you can’t control.”

In his closing statements, Irving made it clear that his father allowed him to make his own decisions. The four-time NBA All-Star says he respects the father-son relationship between LaVar and Lonzo, but doesn’t like the way it’s portrayed at times.

“As I grew up, my dad’s primary goal was for me to be my own kind of CEO, make sure that I’m spearheading it, and I would go to him for advice and he would give it to me,” Irving said. “I respect their relationship, but the way that it’s being portrayed from the outside looking in … I mean, you see it and it may not be comfortable for everyone because, I mean, you see a father with three sons and he has a brand that he’s trying to push into the whole entire world and basically push into everyone’s faces. Whether it be forcefully or whether it be the right thing, they’re your sons at the end of the day. And it’s not LaVar’s life.”