Is Kyrie Irving the second coming of The Black Mamba 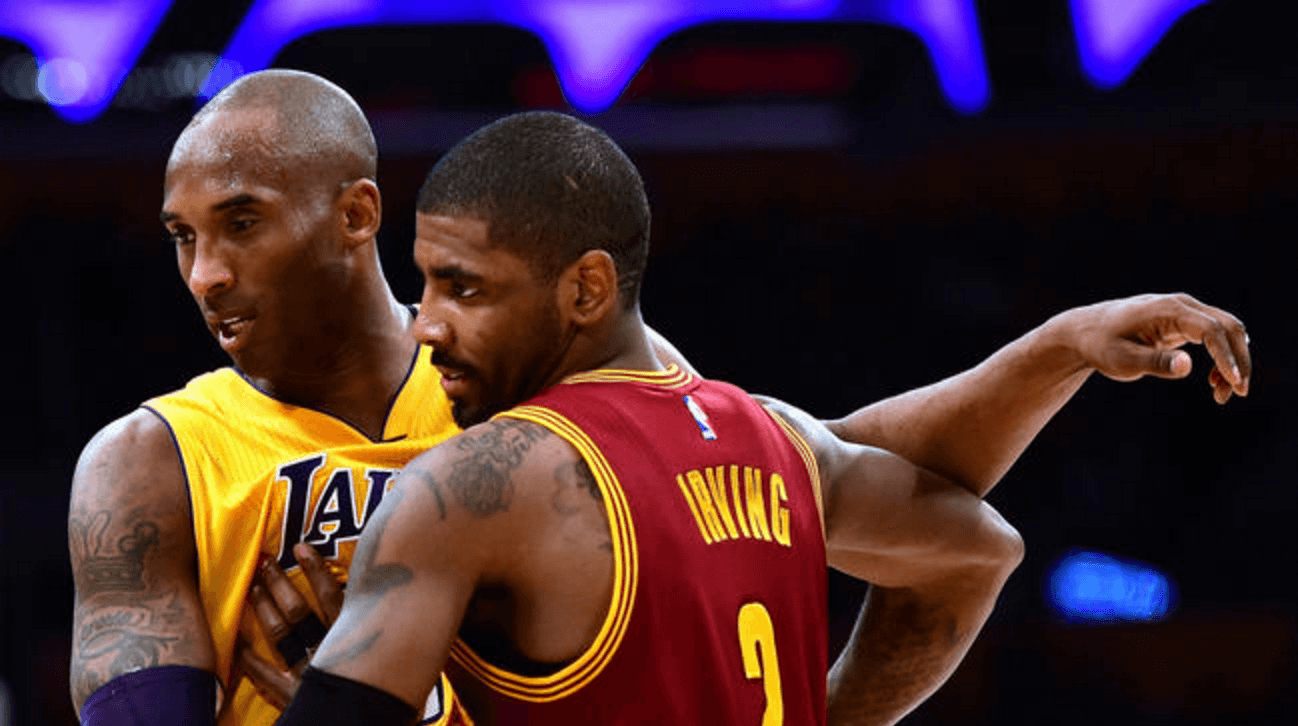 It was the shot heard around the world. Between the legs, step back, dagger three-pointer from Kyrie Irving that sealed the championship for the Cavaliers. After stunning the crowd, Kyrie turned and looked over to the Cavs bench with no reaction, no emotion. Steely-eyed, it looked as if he knew the ball was going into the net regardless of who was contesting, that he would own that moment, no matter what. The cutthroat, cold-blooded nature of the shot was reminiscent of another certified NBA assassin, Kobe Bryant, who happens to have the most game-winners in NBA history. As we look at Kyrie Irving’s upward rise and maturity, as well as his thirst and hunger for the big moment especially in the playoffs, could we be witnessing the second coming of the black mamba? Another dominant guard in the NBA who isn’t just afraid of the big moment, but in fact, thrives in it? Are we watching the emergence of the next Kobe right in front of us?

As we all know, Kobe Bryant recently retired. With Kyrie Irving championed and growing at just 24 years of age, and yet to reach his full potential, him transforming into Kobe’s predecessor is a very real possibility. In terms of overall NBA age, Kyrie is still very young, and with his ability and upside, his prime could very well match and even surpass many great players that have graced the NBA.

Many people are unaware of this, but Kyrie and Kobe actually have a very good relationship already. It started when they were both part of Team USA’s minicamp before the start of the 2012 Olympics, where Kyrie arrogantly challenged Kobe to a game of 1-on-1 as a fruitful 19-year-old. The game never happened, but Kobe related and loved his competitiveness. Their relationship has blossomed ever since, and Kobe has been a mentor of Kyrie’s for some time now, even this year as the two were in constant communication throughout these playoffs. In fact, immediately after leaving the court following the game seven win, Kyrie FaceTimed Kobe where they embraced each other;

“I actually FaceTimed Kobe after the game as soon as I got in the locker room,” Irving says. “Other than seeing my dad and my sister right after we won, FaceTiming him was just a great thing, knowing how he has won five and I just won my first. Then realizing how hard it is just to win one, my respect for him is already high, but it went to another level knowing that he’s got five of them. I’m trying to get a second one.” “[Bryant] was telling me congrats,” Irving says of the FaceTime. “I had been speaking to him throughout the entire playoffs and during the season. During the Finals, we didn’t really talk as much, because for me, I wanted to experience it full on, and if I needed his help, I would reach out to him. He would send me some texts here and there, but mainly he kind of let me be, and let me grow into my own space.”

They have a genuine friendship, and Kyrie looks to Kobe to help and guide him through his own game and career. 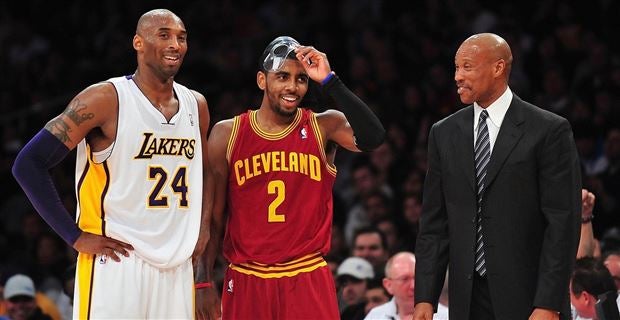 “In terms of a mental approach, as well as some technical stuff about the game, I’ll always go to Kobe because he’s as polished as they come.” “If you’re talking about who literally just physically imposed himself on the game every single day, and that mindset, oh I definitely going to talk Kobe.”

Where this potential really gains momentum is when we move onto their respective careers. So far, Kyrie’s career definitely has shades of Bryant from a statistical and accolade standpoint. Kyrie even surpasses Kobe in areas when they were the same age in both their careers.

Taking into account the injuries that Kyrie has undergone and the time he spent away from the court especially this season, Kyrie is right there matching it with Kobe at the same time in his career. The next few years Kobe takes off, especially scoring wise, and it is projected Kyrie will do the same. Also, at this point in their careers, both are three-time all stars. Kobe is yet to win his single MVP either, and LeBron has stated many times Kyrie Irving has the potential to be an MVP in the NBA one day, which would match Kobe. Their paths are similar, and at this point, not much is separating where they both were at the same age.

Both players have had experience in being the face of a franchise and being the main guy. However, Kyrie’s experience in doing so has come much earlier in his career than Kobe’s did. That experience has taught Kyrie a great deal, and now, he has two of the best role models and players in NBA history in LeBron James and Kobe Bryant to mentor him and guide his journey. 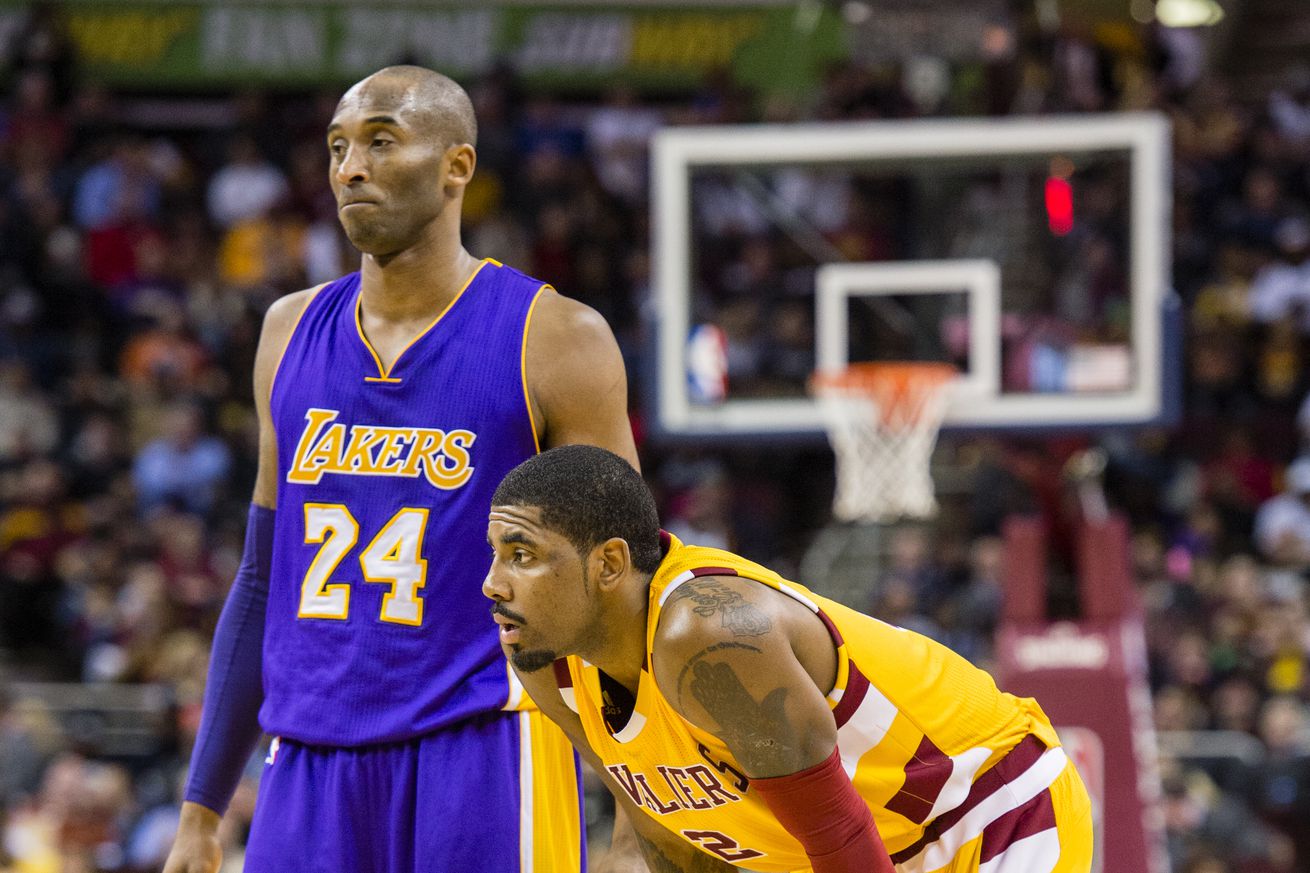 Kyrie will continue to improve, and has already learnt so much studying and analysing Kobe, which has helped him reach the next level.

“I never got a chance to play with Kobe, I always watched from the outside like everyone else did –and I’ve been watching Kobe for however long,” Irving said. “I mean, me and my dad used to watch Lakers games and I was just specifically watching his footwork. I’m just studying that dude constantly, constantly, constantly. And once he became a mentor of mine, it was just great.”

“There was so much going on in my mind that when I started out the game, I actually communicated with my teammates, all right, I’ve got to really just settle into this moment,” Irving continued. “I think it came going into almost ending the second quarter, that moment right there happened, and I was like, okay, I’m fine.” “All I was thinking in the back of my mind was Mamba mentality, just Mamba mentality. That’s all I was thinking.”

The shot was a product of that mentality, and alongside LeBron James, Kyrie Irving put on one of the great running partner performances in an NBA finals series. He truly shone, registering 27.1 points per game in that series, more than ANY LeBron James teammate he’s ever had in the finals in his career. It was not so long ago Kobe was doing the same thing in the playoffs for another dominant force – Shaquille O’Neal. We know how that turned out and we may be seeing the same thing unfold.

Could we be witnessing the second coming of Kobe right before our very eyes? Perhaps deep inside Uncle Drew lies a Black Mamba.

Only time will tell. 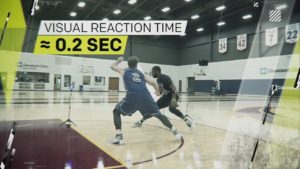