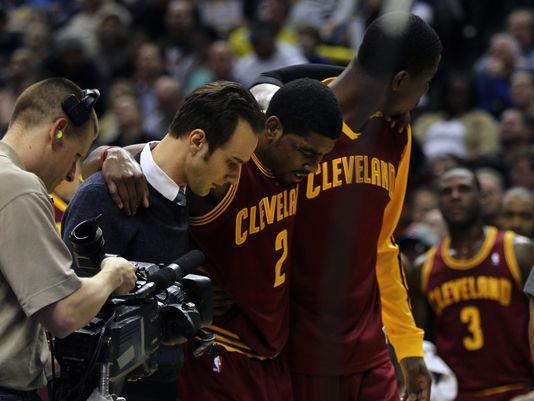 Reports now surfacing reveal that Kyrie Irving suffered a lower leg injury during practice earlier this week. Thankfully, Kyrie’s x-rays from his MRI show both tests on his right leg to be negative. The Cavs are currently labeling him as day-to-day simply as a precaution, and his status for this Saturday’s preseason game is questionable.

{adinserter 2}This week, the Cavs are in Rio De Janiero, Brazil for their second preseason game. Kyrie Irving was seen using a walking boot in Brazil, and while it’s just precautionary, the news still raises concerns for his durability. As evident by his first 3 years in the NBA, Kyrie is undoubtedly injury-prone, having already missed 20% of the potential games in his short career. Kyrie is only as valuable and helpful in the Cavs’ quest for a championship if he’s able to play. In the Cavs’ first preseason game, Kyrie led the Cavs with 16 points, with nearly half of his shots taken within 3 feet of the basket! While this style of play is more or less Kyrie’s basketball identity, it indicates that Kyrie should be a bit more conservative when attacking the basket just so he can stay healthy and be more aggressive later in the season and into the playoffs when the Cavs need him most.

The good news is that this is nothing too serious, and we hope to see Kyrie back in practice and uniform for the rest of the preseason after Lebron faces his old Miami teammates in Brazil.