The Cleveland Cavaliers got another well-rounded victory against the Boston Celtics, their 11th win in the last 13 games. However, their starting point guard Kyrie Irving was visibly bothered by what looked like an injury to his hamstring. Irving left the game late in the fourth quarter and did not finish the game, but did watch from the bench.

After the game, Irving spoke with the media and said he suffered a cramp, not a strain, in the game.

“Just tightened up, that’s all,” Irving said after the game. “I took a spill with [LeBron James] in the first half. I threw a pass to Tristan [Thompson] in the middle [of the] lane, and me and Bron bumped knees. Then my calf started getting tight and my hammy started to get tight. I felt better coming out of the second half. Then when I did that last layup, it started to cramp up. That’s all.”

Irving finished the game with 32 points and 12 assists before leaving the game in the final minute. Irving wanted to return, but coach Tyronn Lue didn’t allow him to.

The Cavs have the day off Friday before taking on the Charlotte Hornets on the road on New Year’s Eve. 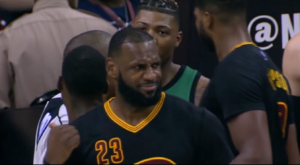