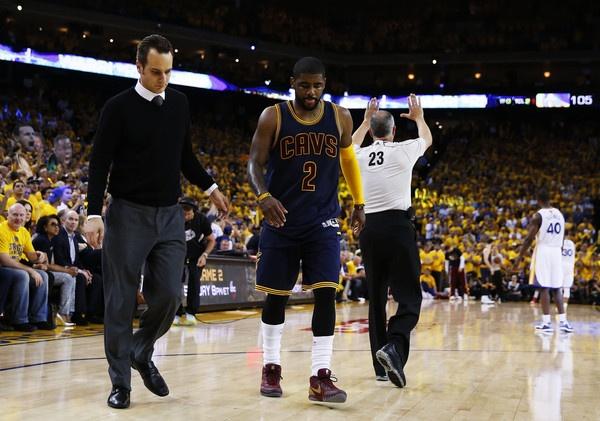 Kyrie Irving and the Cavs suffered another left knee injury, this time during Game 1 of the NBA Finals.

Irving drove by Klay Thompson in the overtime session, but slipped and bumped knees with Thompson, causing him to fall to the floor. Irving kicked the ball out to J.R. Smith, who missed the three pointer, but Kyrie limped back up the floor before the Cavs committed a foul. After the timeout that was called, Irving was shown limping into the locker room again, clearly in pain:

RELATED: Cavs were not Optimistic about Irving’s Status After Game 1 Injury

After the game, Irving was clearly disappointed and voiced his concern about the knee. Irving received an MRI on Friday afternoon, which revealed that he has a fractured left kneecap, and will be out a total of 3-4 months. Surgery is in his immediate future.

Cavs announce Kyrie Irving has a fractured L kneecap and will have season-ending surgery.

This will really make it difficult for the Cavs to defeat the Warriors in these NBA Finals. The Cavs say that Irving’s left knee tendinitis is not related to his knee fracture. LeBron said after the game that it was tough to see Irving like this.

In his stead, Matthew Dellavedova will be manning the point guard spot for the Cavs, and the bench gets even thinner. Cleveland has a tough task ahead, but if LeBron and the Cavs play like their did in the Conference Finals, they’ll give themselves a fighting chance.