If anyone has watched the Cavaliers this season, they would have witnessed a new level of growth in their dynamic point guard Kyrie Irving. Already an All-Star, Irving has taken his game to the next level this campaign, which has ascended the Cavs into perhaps a more lethal outfit than the one that lifted the NBA championship last June.

Irving has shown maturity, and his ability to find his teammates has been superb. One of those teammates is LeBron James, and the powerhouse duo has been devastating this season. Irving’s chemistry with James is growing, and it’s a scary prospect for the league.

It’s hard enough slowing down one of them, but stopping both is proving almost impossible. Even the talented Warriors super team couldn’t handle the dominance of the pair on Christmas Day. Irving is averaging career highs in points at 23.9 and assists at 6 a game, but his chemistry with James isn’t a product of simply getting better, he’s been putting in countless hours of work off the court as well.

Last season, Irving found James on 43 occasions for a basket. This season, he has already found the King 42 times. This speaks wonders of what Irving is doing off the court in studying the game, and studying the best way to maximize his running partner.

James discussed the growth of Irving after the Cavs defeated the Hornets on the road via EPSN.

“It’s the evolution and growth in my point guard,” LeBron James said. “He’s studying the game, he’s watching the game, and now he’s actually going out and playing the game. Just read and reacting, and just continues to get better every single day, every single month. And he’s showing that.”

Irving drove baseline against the Warriors and found a cutting James who dunked on seemingly the entire Warriors roster in a monster three point play to give the Cavs the advantage, and it is something he has been watching back in James’ Miami Heat days with Dwyane Wade, and even in James’ early days with the Cavs.

“He used to do that with Mo Williams even before [Wade], they used to run that play,” Irving said. “He used to get major dunks on that. I watched them.”

With Matthew Dellavedova finding James the most last season for 84 baskets, and Kevin Love coming in second with 69, Irving is ahead of that pace so far this campaign.

He understands it’s about paying attention to the strengths of his teammates.

“It’s paying more attention to details and understanding I have a lot of weapons to utilize,” Irving said. “So coming down and being ready to command the game in a way that is best tailor-fitted for the team.”

Irving understands that he can score the ball, but it’s also helping expand his game.

“I’m confident enough to get my shot off anytime; now it’s more about making sure everyone feels in a good rhythm,” Irving said. “You see all those eyes turn to you and you command so much attention, you have to make the right play.”

With Uncle Drew’s improvement in making his teammates better, the Cavs have found another gear in their collective greatness.

One thing is for sure, it won’t be the last time you see Irving find a cutting James for a thunderous slam. 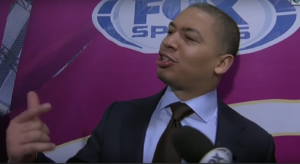