When you are Kyrie Irving, it’s hard to come out of the gates firing after missing six months because of a knee injury, especially when you have a cautious coaching staff that is carefully, and slowly, working on your minutes. But no one can blame coach David Blatt and company for doing so.

Nine games into his season, Irving has had his highs and lows, as expected. He is currently averaging 15.9 points, 2.9 rebounds, and 3.6 assists while playing 25.3 minutes per game for the Cleveland Cavaliers. Putting all these numbers in perspective, they will reveal that Irving is having a very efficient start to his season. His stats translate to 22.6 points, 4.1 rebounds, 5.1 assists, and 1.3 steals per 36 minutes, which seems adequate to justify his potential All Star starting nod.

ESPN’s Dave McMenamin talked about Irving’s comeback in his article. He revealed that the effort not only comes from the coaches, but also from his running mates LeBron James and Kevin Love in trying to work Irving back into playing beautiful music with the Cavs’ other superstars.

The Cavs’ big three adopted a new workout routine prior to Cleveland’s game in Minnesota last week, with the trio showing up early to the team’s morning shootaround session to go through drills together. Irving said it was the first time he, James and Love had collaborated like that all season and he hopes it will continue.

McMenamin shared how Irving appreciates the commitment that he has been receiving.

“I know that all three of us share our own work ethic in what we do to prepare for games and what we do in our spare time in order to get prepared (either) the night before or I’m usually there either the night before or the day of. And I know Bron does an incredible job of getting extra shots up all the time.

“So, for us, all three of us being the leaders of the team, it can only be positive. It was a big-time game for Kev that night and we all felt it. So, him coming in early, hopefully it can show some consistency with all three of us.

“It’s good to see all of us coming in and getting extra work in.”

Irving himself admits to still be in the middle of working his way back to his old lethal form but added that almost everyone around has made it easier for him to go through different mental obstacles.

“I am. I know I am. But it’s not hovering over the team. And I would never allow it to. There are things that I still have to figure out, but it’s still within the framework of the team. And that’s the way I want it to be.”

“I just put so much expectations on myself when I go out there, it feels like there’s a lot of ground that I have to make up and a lot more that I have to prove to myself more or less. When you miss the game for seven months and then you come back, it’s just like, ‘I’ve got to make every shot.’ Like, I have to play well every game.

“For me, it’s just about progressing. And, damn, still going 3-for-15 (against Philadelphia) sucks. But at the end of the day, we’re still winning.”

The team effort is obvious. Kyrie Irving and the rest of his Cavalier family are working hand in hand to ensure the All Star point guard’s smooth and successful comeback. For what it’s worth, the team has won eight of the nine games in which Irving has played. 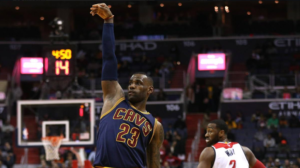