On Friday night, the Cleveland Cavaliers defeated the Indiana Pacers at home for their 45th victory of the season. With the 95-92 win, the Cavs clinched their first playoff spot since the 2009-10 season when they went 61-21 and clinched home-court advantage for the entire playoffs. Kyrie Irving spoke with a sense of relief after the game:

Despite struggling with his shot against the Pacers, Irving praised his team for picking up the offensive and defensive slack. The best part, he said, was the coming together for this season unlike some of his past seasons in the NBA.

“We faced adversity,” Irving said. “Matthew Dellavedova did a heck of a job coming in, as well as our bench. They picked me up. For me, I just have to be better offensively and defensively, more importantly for our team. At the end of the game, we got a big stop and the guys that were in did a heck of a job closing out the game.”

But he’s not the only Cavalier who’s endured numerous head coaches and players coming and going. Tristan Thompson, who was the fourth pick for the Cavs in 2011 after Irving went number one, is just as excited for the postseason.

“Definitely an accomplishment,” Thompson said. “Took longer than it’s supposed to if you asked me four years ago, but it’s part of the process and it makes the journey and the story sweeter that we clinched. To do it with these guys here it’s definitely a blessing and a good opportunity for myself.”

“Just being patient, staying with it,” Thompson said of what he learned along the way. “Definitely have your ups and downs, but as long as you keep working every day and try to be the best pro you can be then good things will come out of it.”

Since being drafted in 2011, Irving and Thompson have played three seasons (the first lockout-shortened) and their Cavs were a combined 78-152 in those 230 games. That’s a combined winning percentage of .339. Those three seasons saw coaches Byron Scott and Mike Brown hired and fired. They are one two of just four Cavs who were here last year, the others being Matthew Dellavedova and Anderson Varejao.

The Cavaliers this season, through 72 games, sit at 46-26, which is a winning percentage of .605. Sure, most of the credit should go to J.R. Smith for his shooting and maturity, Iman Shumpert for his defense and cool high top, Timofey Mozgov for his defense and his embarrassing Russian interview with Cavs sideline reporter Allie Clifton, and of course Lebron James for his overall greatness.

A lot of credit should also go to first-year NBA head coach David Blatt for his professionalism as well as his offensive and defensive schemes that have made the Cavs one of the best teams in the NBA.

Kevin Love was actually unaware of what the victory meant until after the game. He wasn’t as vocal about the playoff spot secured as there was still work to do, but he was very ecstatic inside and looking forward to it:

“It feels good,” Love said. “We still have a lot of work to do. I was told out there on the floor when we finished that tonight we had clinched the playoff spot. It feels good. I’m sure Ky and Delly and Tristan, all those guys said the same thing.”

It was nothing new for the King LeBron James, who will be appearing in his 10th consecutive postseason this year, but he knows the importance of this playoff clinching victory for this young and inexperienced team.

“It’s a huge accomplishment for our team,” James said. “For me, I don’t look that far into it. But for our team, the guys that have never been in the postseason, we have a few guys that have never been in the playoffs and I don’t think they should take that for granted and just overlook that. It’s a huge thing for those guys. I’m happy I was able to be a part of their first clinch for the postseason.” 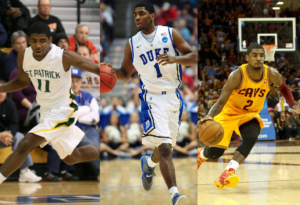