The Cleveland Cavaliers will kick off their 2015-16 training camp next Tuesday on September 29. While many players are expected to be ready to come in and contribute right away, the Cavs also have a few players who are coming off of some injuries and surgeries.

Kyrie Irving and Kevin Love are two of the Cavs key players who are coming off of major injuries and surgeries. Irving fractured his kneecap in the NBA Finals and Kevin Love suffered a dislocated shoulder and a torn rotator cuff to his right shoulder.

Chris Haynes of the Northeast Ohio Media Group reported that both players will be available for training camp, and that Love will likely be ready to go.

“Irving refused to give a timetable for his return in a recent interview with the Associated Press in Miami.

Irving (fractured knee cap) and Love (separated shoulder) will be active during camp, but on a limited basis. The Cavaliers will work the two in slowly and cautiously. The anticipation is that Love will be fully cleared with no limitations before Irving is given the green light, I’m told.

Love said on the ‘Late Night with Seth Meyers’ talk show Sept. 11 that he was ‘a month and a half away’ from returning.

So far, Love’s workload on the court consists of non-contact drills; while Irving has been coy about what he has been doing.” 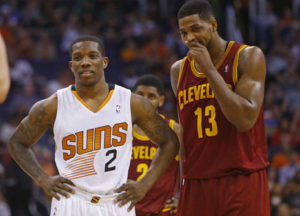