Kyrie Irving Finally Has His Eyes On A Return Date The last image of Kyrie Irving on the court saw him gingerly walking, with much frustration, towards the locker room in Game One of the Cleveland Cavaliers’ finals series in Golden State. But that’s about to change in due time as the All Star guard is doing his due diligence in rehabbing his knee cap.

“The biggest thing now is just not trying to overdo it. Just trying to maintain the same consistency and get back into game shape. I think that’s the biggest thing. I haven’t been cleared for contact yet, but there’s nothing stopping me right now from fully sprinting and doing basketball game things. There’s no drills that I’m not able to do right now in terms of my own workouts that’s limiting me. It’s just about getting stronger in the weight room, strengthening my leg up again and getting back into game shape.”

The team has avoided giving out a return date but Irving himself already has something in mind.

“There’s light at the end of the tunnel. In terms of a date, I do have one in my head, but obviously, I’m not going to share it for a little bit. I think all the rumors that everyone said in terms of [a] January [return] or whatever, I’ll let them stay out there. But for me, I’m just trying to take it one day at a time, and I’m just continuing the process.”

Being sideline for this long has given him a new perspective on things and is slowly molding another aspect of his leadership. Irving also shared the confidence that he has in his teammates, which is also helping him by taking more pressure off himself to avoid pushing too hard for a return.

“It’s been difficult, but for me, it’s just about being there for my teammates. I mean, I think everybody knows by now I’m the biggest supporter of our teammates and one of the leaders on the team, and I’m going to continue to do what’s needed from me as a leader. And that’s continuing to use my voice, be there every single day and be there before everybody gets there [until] my work is done.”

“I mean, we have an incredible team with our first and second unit. We’re learning more and more about each other, and our culture here is still being built, but we still have guys that are returning from last year, so we feel pretty good about it.”

Mo Williams and Matthew Dellavedova also deserve a lot of credit as they have done a tremendous job in manning the point guard duties while Irving makes his way to full health. The current tandem at the one-spot offers two entirely different dimensions to Cleveland’s attack in the backcourt, and the team is reaping the benefits of this offense-defense combo as they have managed to win four straight games after losing a close one in their season opener against the Chicago Bulls.

When Kyrie Irving returns, not only will he make the team more prolific and dangerous, but his presence will also shave quality time off of LeBron James and Kevin Love’s shoulders. 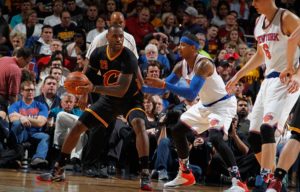