What Kyrie Irving Can Learn From LeBron James Kyrie Irving may be one of the main reasons that LeBron decided to come home, as LeBron has never really had a star point guard to help him get the ball. Like Kevin Durant with Russell Westbrook, LeBron and Kyrie can together improve as a duo. In LeBron’s ‘Coming Home’ article, LeBron spoke about how he was excited to play with Kyrie, as he confidently stated: “I think I can help Kyrie Irving become one of the best point guards in our league”

Mario Chalmers, point guard of the Miami Heat, had numerous disagreements with James. They never really had a ‘friend’-type relationship, but rather a ‘game’-relationship, they had to play together and win together. However, Kyrie and LeBron already seem well acquainted; when Miami would face Cleveland the two would often have a chats on the court. The two also played very well together in the 2014 All-Star game, check out this alley-oop.

When LeBron left in 2010 for Miami, the only hope for Cleveland was Kyrie Irving who was drafted in 1st overall in the 2011 draft. As soon as Kyrie was drafted, he emerged as the franchise’s star player immediately. During the four years while LeBron was in Miami, Kyrie has proved himself worthy as a star player, he’s exceeding his potential game by game. Kyrie has appeared in the All-Star game twice, one of which he won All-Star MVP. Kyrie suffered deeply from three consecutive losing seasons, and his morale was rumored to be low and numerous Cleveland-faithful thought he was about to follow LeBron’s footsteps out of Cleveland.

{adinserter 2} However, Kyrie recently signed a 5-year max contract with Cleveland and he’s ecstatic about remaining in Cleveland. With LeBron coming back home, Kyrie has the chance to improve his game significantly with the King at his side. When asked about playing with LeBron, Kyrie said “It makes me feel good.” He further said: “I’ve been watching LeBron since I was a kid, so to have him come back…it’s a great feeling. I feel like we can accomplish a lot.”

Kyrie continued to talk about Cleveland by stating “the direction we’re going right now, I’m really happy about.” Because of the offseason signings with LeBron James and possibly Kevin Love, Kyrie thinks the Cavs are the favorites this year. He said “Everybody’s going to be coming for us. That’s what you want as a competitor, especially in the great league we play in.” He further admitted that “I don’t have the perfect way to become a leader and I’m just figuring it out.”

LeBron can be a great role model to Kyrie, both of them are great passers and elite finishers. Their games are extremely alike, only time will tell how the two will mesh. The highly awaited combination is less than 3 months away. Fasten your seat-belts Cavs fans, it’s about to be a great ride. 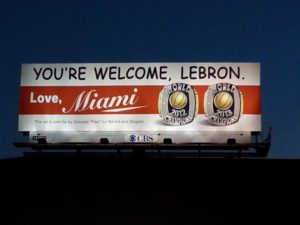