Kevin Love prides himself on being an inside force as well as a rebounding machine in the NBA. Love has been one of the most consistent players in the NBA when it comes to double doubles in points and rebounds. So far this season, he has five double doubles in eight games and is averaging 17.6 points and 12.0 rebounds to go along with 2.8 assists, and 2.3 three-pointers made per game.

Love may not be averaging as many points as he was in his Minnesota days, but he’s still rebounding at a high rate for a team that has some fierce rebounders in Tristan Thompson, Timofey Mozgov, Anderson Varejao, and LeBron James.

“I think I’m getting a lot of different looks this year,” Love said. “I don’t know if that’s a product of Shump and Kyrie being out, but I think from a comfort standpoint and just looking at how the offense breaks down, so far just getting near the basket it’s a lot better for me.”

The increase in usage is not surprising, but it is great to see that Love is going this while seeing the exact same minutes this season as he had last season at 33.8 per game. He’s been mixing it up by playing closer to the rim and stretching the floor to hit three pointers, all this to make sure he’s featured in the offense a lot more. He’s made an average of 5.5-of-12.7 field goals last year, but has upped his makes and attempts to 6.3-of-15.4 this season.

Moving forward, Kevin Love should keep his role, usage rate, and statistical numbers up to these standards with the eventual returns of Kyrie Irving and Iman Shumpert. 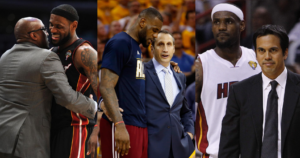