A lot of analysts have criticized Kevin Love‘s defense since he became a member of the NBA’s defending champion Cleveland Cavaliers. However, in last night’s 140-135 overtime win over the Washington Wizards, Love silenced his haters by posting 39 points (11-of-17 FG, 6-of-10 3PFG, 11-of-11 FT), 12 assists, three rebounds, and three steals in his 42 minutes of playing time.

Love’s defensive game has continued to improve, and there are stats to prove it, via Chris Fedor’s article for Cleveland.com.

According to ESPN’s defensive real plus-minus rating, a stat measured by points allowed per 100 defensive possessions, Love ranks second among all Cavaliers and near 50th overall out of more than 400 players graded.

If you look at Love’s on/off court numbers with the Cavs, the stats reinforce his importance on the defensive side of the ball.

Given the criticism and trade rumors that Love consistently endures, he should instead be praised for the effort he has put into his defensive craft.

Since being mentioned in Carmelo Anthony-to-Cleveland trade rumors, which Cavs Head Coach Tyronn Lue squashed after last night’s win, Love has racked up 62 points on 18-of-33 from the field, including 10-of-17 from three-point range and 16-of-17 from the free-throw line to go with 28 rebounds, as Fedor pointed out in his recent article.

It’s good to be wanted,” Love told Cleveland.com before his team’s four-game roadtrip.

There is no doubt that Love’s offensive production is vital to the Cavaliers, but it’s his improving defense that continues to be a key component in his team’s success.

“Kevin (Love) should be happy that teams want him, but he’s not going anywhere.” 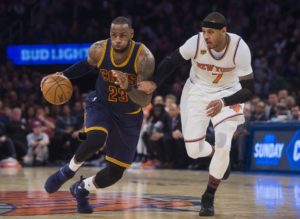