Kevin Love is a star who should play for Cleveland, not trade bait It’s been less than 400 days after ending a 52-year drought, and Cleveland is back to pointing fingers and realizing it’s hard to win. After Golden State dismissed the Cavaliers in five games earlier this month, relinquishing the throne to a seemingly unreachable team has induced a lot of irrational thinking within Cavs Nation. But the keyword is seemingly.

Yes, the Warriors did in fact come across as too much for the Cavaliers in the 2017 NBA Finals. Should have, could have, would have has been way to rationalize what has been countless star-stuck hunts for players that can help Cleveland match a “Kevin Durant addition.” It’s fair, however, to wonder how many or how quickly fans would take this position if not for a few things:

1. If the Cavaliers held on in the last minute of Game 3 to give themselves a chance to tie the series before being overwhelmed and losing their season in Game 5?

2. If the Cavaliers, a three-point shooting team, found more luck than 27% on wide open threes?

3. If the Cavaliers, whose starters outscored the Warriors All Star lineup in 3/5 games, had a more reliable bench?

Should have, could have, would have, right? No more room to think except for the worst? Well, indulge me: Hypothetical situations may not help anything, but overreacting to real ones can do more harm than good.

One of the future hypothetical fans find fitting to address is the Kevin Love-Better Defender switch – where the trade rumors for Paul George have nested. However, just like the point of those three scenarios above, the results of the Finals were not as bad as you may think; same goes for Love’s defense.

Forget that Kevin Love actually had the second most blocks and steals for the Cavaliers in the 2017 Finals. Forget that while Kevin Love was on court, the Warriors’ pace was slower and they scored fewer per 100 possessions, per NBAWowy. Even forget that the league leaders in transition scoring shot 7% and 12% worse after defensive rebounds and steals respectively with Kevin Love hustling back on defense. What Cleveland has in Kevin Love is an incredibly unique talent, but fans forgot the value of rebounding and shooting big men, because all they can remember is this:

Of course, plays like this win championships, not stats. But seriously consider if the starting lineup – let alone Kevin Love – is at major fault for losing Golden State. Surely it’s a top-heavy team that rides or dies with LeBron James and Kyrie Irving, but to trade Love means to deny the glaring team issues of bench scoring and overall defense and blame that on someone who’s doing above the average.

You don’t need stats to prove this, but even the eye test should be telling about Love’s improvement this season. When he didn’t shoot well in Game 3 and 4 after averaging 21.0 ppg in Games 1 and 2, he grabbed nine steals. Love took over 13 shots a game, but averaged under 1.5 turnovers all series and had less turnovers in those five games than James did in the second quarter of Game 1. Certainly, we did not get a below average effort from Kevin Love.

And we shouldn’t feel that an above-average Kevin Love isn’t good enough. The average, in this case, are his teammates who didn’t perform close to level needed to overcome these Warriors. Tristan Thompson being out rebounded by Steph Curry and posting the lowest +/- rating over the first three games? JR Smith averaging more fouls than points for half the series? There are no excuses for anyone, but there should be equality for all excuses. As a team, the Cavaliers didn’t put it together; but to pin that on Love so easily is worrisome considering his efforts.

Of course, tweaks to the roster are needed to avoid repeating a disaster like finishing in second place. But we shouldn’t lose the only player in NBA playoff history to average a double-double and shoot over 45% from deep because the habits of the Cavaliers’ 21st best defense caught up with them. Believe it or not, we have the best version of Kevin Love anyone has ever seen. While his numbers last season were nothing like his Minnesota days, Love reached new heights in conditioning and defensive activity. He’s a transcending Power Forward in his prime.

Shipping Love also means Cleveland loses its best rebounder and three-point shooter from the season, creating new issues to fix. Remember, the Cavaliers’ front court is Kevin Love, Tristan Thompson and Channing Frye. Sure, changes will be made but no matter who you put on the wing, taking Love out of this trio makes Zaza Pachulia, Draymond Green and Javale McGee another advantage for Golden State.

We do not need a Paul George – although the benefits are undeniable, they don’t fully resolve the issues against the Warriors. Building the bench and defensive discipline are keys to redemption, not ditching a star who’s made improvements and sacrifices for Cleveland. 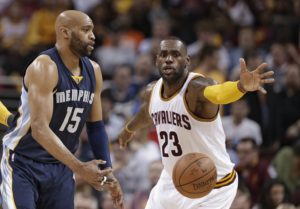