Game 4 of the Cavs first round playoff series against the Boston Celtics did not go very smoothly. Not that the Cavs lost, but they might’ve limbed out of their victory at the TD Garden. The Cavs overcame what Point Guard Kyrie Irving calls “the most physical game [he’s] every played in,” as the Wine and Gold sweep the franchise that LeBron had faced in his last playoff run with Cleveland in 2010. The Cavs will return to Cleveland with a week to prepare for either the Chicago Bulls or the Milwaukee Bucks, but they must recover from more than bruises left in Boston. It all started when Celtics’ Kelly Olynyk and Cavs’ Kevin Love chased a 50-50 ball toward the sideline corner late in the third. In hot pursuit and inside position, Kevin Love practically secured the board. That’s when Olynyk forgot he was playing an honorable sport called basketball:

After a retaliation from Cavs’ Kendrick Perkins on Celtics’ Jae Crowder, calling Game 4 “physical” became an understatement. With players firing back and fourth since the end of the game, we now have updates that truly matter: Kevin Love will only miss 2 weeks due to a dislocated shoulder.

Kevin Love: "I thought it was a bush-league play … I have no doubt in my mind that he did it on purpose"

More Kevin Love: "That's just not a basketball play … The league will take a look at it and it better be swift and just"

Kevin Love says he felt confident about making a second round return in the playoffs, and that he felt great after popping his shoulder back into place. After his early departure, the Cavs won Game 4 with team rebounding and matching Boston’s physicality: 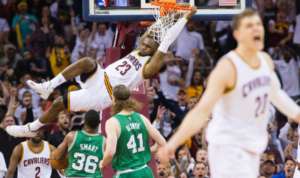